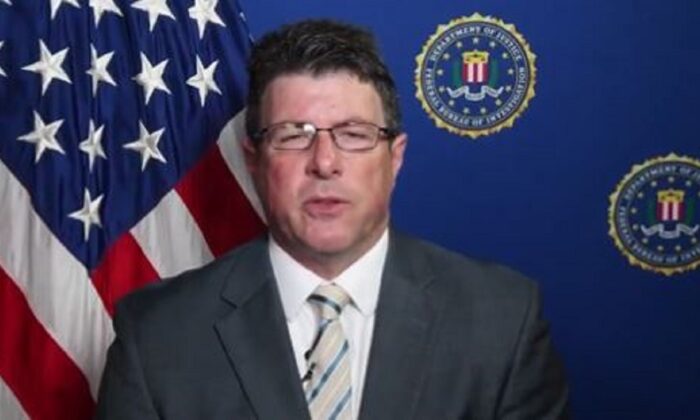 Timothy Thibault in a still from video. (FBI/Screenshot via The Epoch Times)
By Zachary Stieber

Republicans in the House of Representatives said on Nov. 25 that they will subpoena a former FBI official who’s accused of misconduct if necessary.

Three top Republicans on the House Judiciary Committee wrote in a letter to Timothy Thibault, the former FBI official, that he has refused to voluntarily comply with requests for a transcribed interview despite his statement that he “[welcomes] any investigation.”

“Our requests, therefore, remain outstanding,” the Republicans said. “Your testimony is necessary for our oversight, and you can be assured that the Committee will continue to pursue this matter into the 118th Congress, including by compulsory process if necessary.”

Because Republicans flipped the House in the midterm elections, the party will control each committee once the new Congress is sworn in shortly after the start of 2023.

If Thibault is subpoenaed, he will have to appear or risk facing contempt of Congress charges.

Rep. Jim Jordan, the top Republican on the House Judiciary Committee, and two members of the panel, Reps. Darrell Issa (R-Calif.) and Mike Johnson (D-La.), sent the letter to Thibault.

A request for comment to representatives of Thibault from The Epoch Times wasn’t returned by press time.

Republicans are investigating allegations from whistleblowers that Thibault, who was the assistant special agent-in-charge at the Washington Field Office before retiring in August, pressured agents to reclassify certain cases as “domestic violent extremism” even though there was “minimal, circumstantial evidence to support a reclassification.”

Other whistleblowers say that when the FBI acquired information in 2020 about Hunter Biden, President Joe Biden’s son, Thibault “ordered the matter closed without providing a valid reason as required by FBI guidelines,” Senate Republicans have said.

Thibault and other officials then tried to mark the matter in such a way that it couldn’t be reopened in the future, according to the whistleblowers.

Whistleblowers also told the senators that an assessment was utilized by the FBI to improperly label another chunk of Hunter Biden information as disinformation, and that the information was siloed to only certain agents.

“If these allegations are true and accurate, the Justice Department and FBI are—and have been—institutionally corrupted to their very core to the point in which the United States Congress and the American people will have no confidence in the equal application of the law,” Sen. Chuck Grassley (R-Iowa) wrote in a previous letter to FBI Director Christopher Wray, a Trump appointee, and Attorney General Merrick Garland, a Biden appointee.

The FBI has declined to comment and the Department of Justice (DOJ) didn’t respond to requests for comment by press time.

Jordan wrote in a recent letter to Wray and Garland that they have ignored or “failed to respond sufficiently” to requests for information and documents, and that they might turn to the compulsory process to obtain the materials if that continued.

As Republicans prepare to take control of the House, Jordan has unveiled other early priorities for when he becomes chair of the judiciary panel.

Jordan wants to speak to DOJ officials to question them on a range of matters, including how the DOJ has abused the Foreign Intelligence Surveillance Court system.

Multiple U.S. attorneys, including Matthew Graves, are also on the list.

“We expect your unfettered cooperation in arranging for the Committee to receive testimony from Justice Department employees,” Jordan said.

As part of the investigation into the FBI, the Republicans are seeking testimony from Wray; two officials involved in pressuring Big Tech companies to censor information, special agent Elvis Chan and Laura Dehmlow, chief of the bureau’s Foreign Influence Task Force; and Steven D’Antuono, who succeeded Thibault.