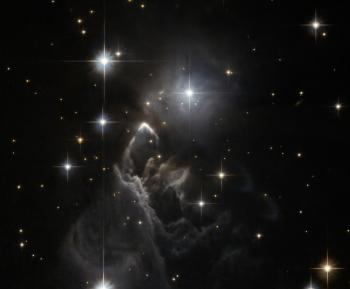 Cassie Ryan
View profile
Follow
biggersmaller
Print
The Hubble Space Telescope has revealed a new image of a glowing nebula featuring a “boomerang-shaped” halo, but astronomers are still mystified about where its light is coming from.

An image of “Ira’s Ghost” was captured by the telescope as a “bonus target” during its spare time, according to News.com.au. The luminescent boomerang shines distinctively at the upper edge of the formation.

The cosmic cloud is an example of what is known as a “reflection nebula” – a cloud of gas and dust illuminated by an external light source. This is different from an “emission nebula” which is lit from within.

Originally discovered in 1983, the ghostly enigma is part of the Taurus constellation within our galaxy, close to the Milky Way’s central plane. It was named after the infrared Astronomical Satellite (IRAS) that found it.

However, to date, astronomers have not located a nearby star to explain where the light is coming from.

According to NASA's website "reflection nebula" is like fog around a street lamp, which shines only because the light from an embedded source illuminates its dust. The nebula does not emit any visible light of its own.

One of the explanations for its formation is that a high velocity star once travelled through the interstellar cloud at 200,000 kilometers per hour (125,000 miles per hour), creating this puzzling yet beautiful phenomenon.