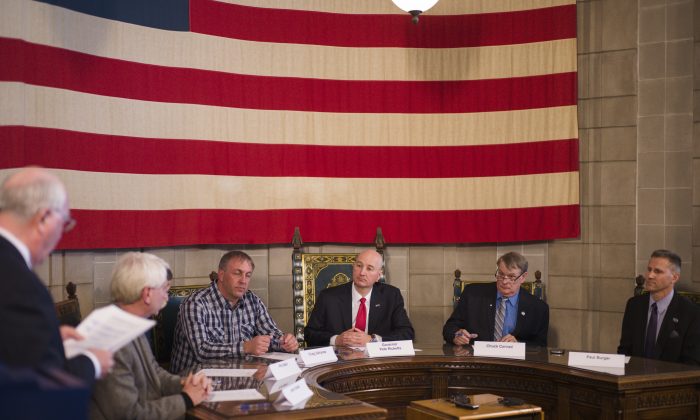 Members of the Nebraska electoral college and Gov. Pete Ricketts at the State Capitol in Lincoln, Neb., on Dec. 19, 2016. (AP Photo/Nati Harnik)
Politics

LINCOLN, Neb.— Nebraska’s presidential electors stuck to their commitment Monday to support Republican Donald Trump despite pressure from thousands of people around the nation who implored them to vote for someone else.

All five electors cast their votes in a ceremony at the Capitol with Gov. Pete Ricketts and Secretary of State John Gale.

The electors had been expected to back Trump, who won the popular vote statewide and claimed a majority in all three of Nebraska’s congressional districts. Democrat Hillary Clinton won the national popular vote but lost in the electoral college.

Elector Chuck Conrad of Hastings said he received more than 200 snail mail letters a day in the week before Monday’s vote, enough to fill three Wal-Mart bags. On Saturday, he counted 238, nine of which came from Nebraska residents. Most of the Nebraska letters were from Omaha and Lincoln, although Conrad said he received a few from smaller towns.

“They were my constituents,” said Conrad, an at-large elector. “Every Nebraska one, I would open.”

Elector John Dinkel of Norfolk said he believes Trump has done a “fantastic job” so far with his announced cabinet appointments, and voiced hope that the president-elect will eventually unite the country.

“I just hope and pray his detractors will give him a chance, and for the sake of America, that they’ll come around,” said Dinkel, who represented the 1st Congressional District.

Ricketts, who led the voting process, said in an interview earlier Monday that he supports the law requiring voters to reflect how the public voted.

“It demonstrates that we are serious about our electors following the will of the people,” said Ricketts, a Republican who endorsed Trump. “The people of Nebraska voted. They expect their wishes to be upheld.”

The vote came after protesters gathered at the Nebraska Capitol in a last-ditch effort to keep Trump from formally winning the presidency.

About 40 people convened beneath the Capitol rotunda, some with signs that said “Elect the Real Winner” and “Don’t Let Russia Trump America,” a reference to Russia’s efforts to sway the election. Some protesters later crowded into a hearing room where Ricketts held a news conference on an unrelated topic.

Gloria Van Ackeren, 72, said the show of opposition was important to at least send a message that a large number of Americans don’t believe Trump is fit to become president. Van Ackeren said she stands opposed to “his character, his judgments, his values and his choice of support team.”

“I’m just horrified,” he said. “I feel like this is the end of our democracy.”

Korynne Bolt, 27, of Lincoln, said she was afraid a Trump administration will make good on his promises to repeal parts of the Affordable Care Act. Bolt said her 25-year-old brother has cancer and is too sick to work, but his treatment costs an average of $40,000 a month.

“I want people to know that it’s not just some fringe group protesting,” Bolt said. “This will affect people’s lives.”