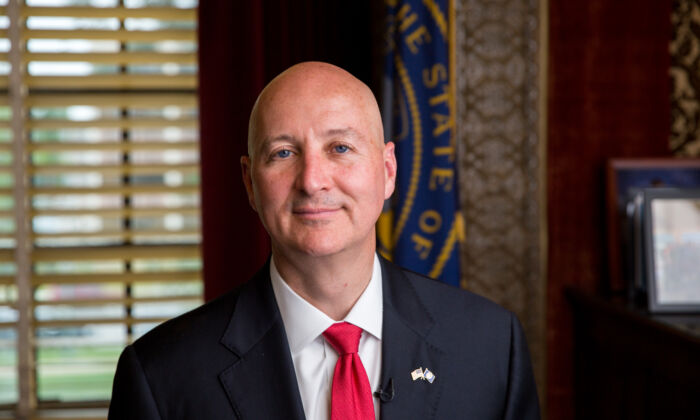 “Nebraska is a pro-life state. I believe life begins at conception,” the Republican governor told CNN’s “State of the Union” on May 15.

“If Roe v. Wade, which is a horrible constitutional decision, gets overturned by the Supreme Court, which we’re hopeful of, here in Nebraska, we’re going to take further steps to protect those preborn babies.”

Ricketts told CNN anchor Dana Bash that such statewide legislation should include cases of rape or incest. “They’re still babies,” he said.

Politico reported on May 2 on a leaked draft of a Supreme Court opinion indicating that conservative justices were poised to strike down Roe v. Wade, the landmark 1973 decision that legalized abortion nationwide in the United States.

During the interview, Bash noted that, unlike 13 other states, Nebraska doesn’t have a post-Roe trigger law in place to automatically outlaw abortion if Roe v. Wade is reversed. An effort to pass similar legislation in Nebraska failed by a vote of 31 to 15—two votes short of the 33-vote threshold to end the filibuster and force a vote.

“I will work with our speaker of the legislature to work on a special session and do more to protect preborn babies,” Ricketts said. “We’ll have to wait and see what that decision is before we can take further steps, but that would certainly be my intention.”

In 2010, Nebraska became the first state to ban abortions at 20 weeks of pregnancy or later, and the state outlawed a second-trimester abortion procedure in 2020, despite fervent protests from pro-abortion campaigners.

The disclosure of the draft opinion, which isn’t necessarily final, has sparked a new nationwide debate around abortion. Some analysts also predict that news of overruling Roe v. Wade will see a surge in support for Democrats in the fast-approaching November midterm elections.

Chief Justice John Roberts has ordered a full-scale investigation into the unprecedented leak.

In the case of such a reversal, 16 states and District of Columbia have laws that allow abortion, according to the pro-abortion Guttmacher Institute, including four that have codified abortion throughout pregnancy.