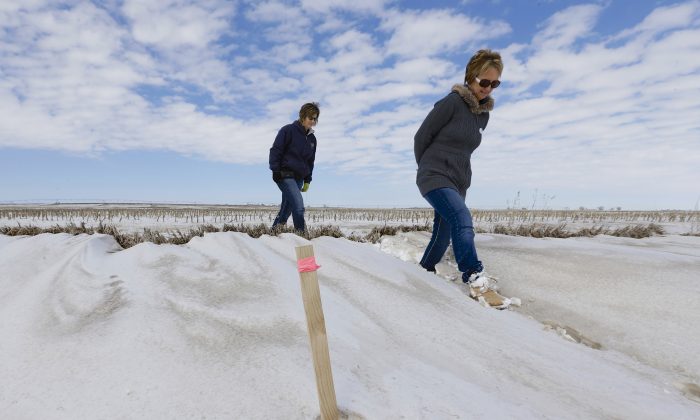 Sisters Jenni Harrington (L) and Abbi Kleinschmidt pass a stake that marks the proposed route of the Keystone XL pipeline on Harrington's property near Bradshaw, Neb., on March 11, 2013. The Republican-led Congress appears ready to approve the Keystone XL oil pipeline but Harrington says they won't sell out the next generation for any amount, not even $50 million. No matter what actions are taken in Washington, the entire 1,179-mile project could be delayed until the state of Nebraska signs off on the route. (AP Photo/Nati Harnik)
US

OMAHA, Neb.—The Republican-led Congress appears ready to approve the Keystone XL oil pipeline, but no matter what actions are taken in Washington, the entire 1,179-mile project could be delayed until Nebraska signs off on the route.

After several years of intense debate, the routing process is before the Nebraska Supreme Court, and depending on how the justices rule, months or years could pass before construction begins in that state.

Even if approval comes from Washington and the high court, opponents are looking for new ways to block the project, including filing a federal lawsuit on behalf of Native American tribes in Nebraska and South Dakota over the possible disruption of Indian artifacts.

The court is considering whether an obscure agency known as the Nebraska Public Service Commission must review the pipeline before it can cross the state, one of six on the pipeline’s route. Gov. Dave Heineman gave the green light in 2013 without the involvement of the panel, which normally regulates telephones, taxis and grain bins.

The justices have given no indication when they will render a decision.

President Barack Obama has said he is waiting for the court’s decision, and the White House on Tuesday threatened to veto the bill in what was expected to be the first of many confrontations with the new Congress over energy and environmental policy.

“There’s no confusion from our perspective that the White House knows this route is still risky,” said Jane Kleeb, executive director of Bold Nebraska, a leading opposition group.

The $8 billion pipeline would carry oil from Canada through Montana and South Dakota to Nebraska, where it would connect with existing pipelines to carry more than 800,000 barrels of crude oil a day to refineries along the Texas Gulf Coast.

But the massive oil spill in the Gulf of Mexico in 2010 followed by another spill in the Kalamazoo River in Michigan only months later rattled both Nebraska landowners and lawmakers, who worried about what a spill could do to the Ogallala aquifer, which supplies drinking water to about 2 million people in eight states and supports irrigation.

Supporters of the pipeline say those fears are exaggerated, and that the project would create jobs and ease American dependence on oil from the Middle East. A State Department report raised no major environmental objections, they note.

The original route “was the least disruptive in terms of the amount of land that we had to dig up, and that’s generally the principle that you look at when you are designing these routes,” TransCanada spokesman Shawn Howard said Wednesday. “I think some of these opponents think that you can just draw a route on the back of a napkin and hand that in and say, ‘Here’s what we’re considering.'”

Nonetheless, TransCanada bowed to pressure to redraw the route through Nebraska to avoid the most ecologically sensitive parts of the Sandhills region and the aquifer. In 2012, lawmakers approved a law that allowed the governor to give TransCanada Corp. the power to force eastern Nebraska landowners to sell their property for the project.

Several landowners sued, arguing that state law placed regulation of pipelines and other utilities with the public service commission. A lower court sided with landowners last year, and the state Supreme Court is now considering the state’s appeal.

In recent years, pipeline opponents have sought to persuade Nebraska landowners not to accept TransCanada’s money. In response, TransCanada has blitzed the state with newspaper, television and radio ads to try to sway public opinion and offered property owners as much as $250,000 for access to their land.

But no amount will shake the resolve of some opponents.

“They could offer $50 million. We don’t care,” said Jenni Harrington, part-owner of a family farm on the pipeline route near Benedict. “We’re not going to sell out the next generation for any amount of money.”

TransCanada, which says it’s already facing billions more in costs as the project lags, is just as resolute.