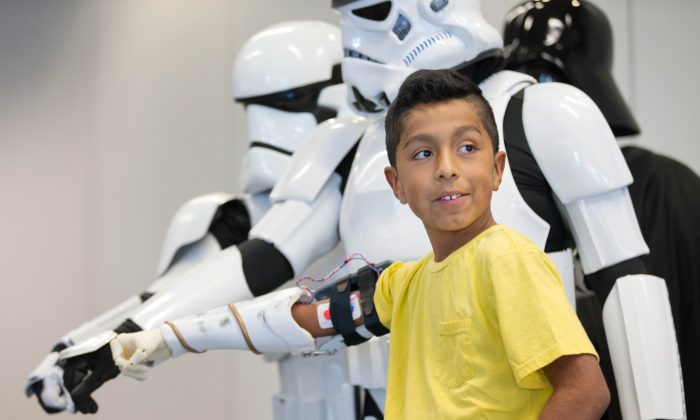 In this Thursday, Jan. 14, 2016, photo, Alvin Garcia Flores poses for photos with Storm Troopers as he shows off his new bionic arm in Omaha, Neb. Garcia Flores, a 4th-grade student at Gateway Elementary School in Omaha, received a 3D-printed bionic arm from Limbitless Solutions, which was delivered by volunteers from the 501st Legion, the national fan organization for Star Wars. (Matt Miller/The World-Herald via AP)
US

Alvin Garcia Flores, who was born with a right arm ends just below his elbow, got his new prosthesis at Gateway Elementary School Thursday from members of the 501st Legion, a national fan organization whose members cosplay as characters from the “Star Wars” films. Darth Vader, an imperial officer, two stormtroopers and a droid made the delivery.

The white arm with gold trim was created by Limbitless Solutions, a Florida nonprofit that provides children with bionic arms for free. The nonprofit created Garcia’s arm after his principal, Terry Burton, reached out to the organization.

“I hope that the arm gives Alvin more self-confidence at school around his peers,” Burton said in a news release.

Flores was surprised with the gift and put it on in front of about 140 of his fellow fourth-graders.

Alvin says he was shocked to receive the arm and showed it off to his classmates.

His mother, Leticia Flores, watched as her son tested the gift.

“He knows that I love him the way that he is… and I always tell you, Papi. Don’t ever let anyone tell you what you can and cannot do, you know, right?” Leticia said.