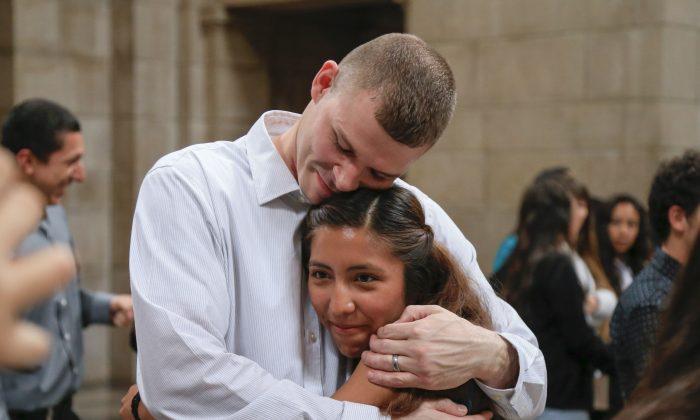 Helen Estanislao and Antonio Perez celebrate outside the Legislative Chamber at the State Capitol in Lincoln, Neb., Wednesday, April 20, 2016, after Nebraska lawmakers overrode Gov. Pete Ricketts veto of a bill that would allow certain immigrants to get professional licenses. The bill would apply to young immigrants who entered the country illegally but received temporary legal status under a 2012 Obama administration policy. (AP Photo/Nati Harnik)
US

LINCOLN, Neb.—Nebraska will allow thousands of immigrants brought to the U.S. illegally as children to work in at least 170 professions that require state licenses including health care and education after lawmakers overrode conservative Republican Gov. Pete Ricketts’ veto of the measure on Wednesday.

Senators took the vote on the last day of their legislative session, five days after Ricketts called it unfair to immigrants who followed the legal pathway to citizenship. Young immigrants and other supporters erupted in applause from the gallery of the chamber following the 31-13 vote.

The new law applies to immigrants who received lawful status under President Barack Obama’s executive action in 2012 that allowed them to stay. Nebraska had nearly 5,200 youths who qualified as of December, according to the latest data from U.S. Citizenship and Immigration Services.

Supporters touted the Nebraska plan as a way to fill jobs in a state with an unemployment rate of only 3 percent and a skilled worker shortage in fields such as manufacturing and nursing. Ricketts referred to the proposal as an “amnesty bill” and tried to pressure lawmakers with press conferences, open letters and personal phone calls to senators.

The bill’s sponsor, Democratic Sen. Heath Mello of Omaha, said the law’s intent is to keep educated youth in Nebraska so they can contribute to the economy.

The bill divided Republican lawmakers, pitting staunch opponents of illegal immigration against those who cast it as a business opportunity.

“To me, it’s baffling that we would not support these young people,” said Republican Sen. Kathy Campbell.

Republican Sen. Les Seiler said he came to support the bill after learning that some immigrant youths in Omaha were getting educated in Omaha and taking their skills to Iowa because they couldn’t get licensed in Nebraska.

“Council Bluffs (Iowa) ought to be down here opposing this bill,” Seiler said. “They’re the beneficiaries of our stupidity.”

Opponents countered that the measure condones the actions of parents who came to the country illegally with their children.

“No president can simply proclaim that there is a consensus on an issue or deadlock on an issue and then proceed to take matters into their own hands,” said Republican Sen. Lydia Brasch, the daughter of Ukrainian immigrants.

After the vote, Ricketts said he believes most Nebraska residents oppose giving professional licenses to the immigrants.

“Certainly I had made my opposition to this bill known to individual senators,” he said. “I think the senators ought to be talking to their constituents as well.

The legislation won support from an array of business and religious groups, the Nebraska Cattlemen Association and Omaha Mayor Jean Stothert. The new law applies to at least 170 professions, from electricians and pharmacists to tattoo artists and mixed martial artists.

The new law applies to immigrants who received lawful status under President Barack Obama’s executive action in 2012 that allowed them to stay.

Obama’s 2012 deferred-action policy applies to people who are at least 15 years old, arrived in the U.S. before their 16th birthday, were under 31 in 2012, have lived continuously in the U.S. since 2007 and are in school or working toward a degree. The policy gives those individuals a Social Security number, a two-year work permit and protection from deportation.

Nebraska has fought various aspects of the policy. Last year, it became the nation’s last state to extend driving privileges to immigrants who were allowed to stay in the U.S. under Obama’s program. Ricketts opposed that measure as well, but senators overrode his veto.

The issue has already surfaced in other legislatures and is expected to spread.

Other states also have already approved changes for professional licensing, including Florida, which enacted a law in 2014 that allows law licenses for youths who were brought to the U.S. as a minor, have work authorization and have lived in the country for more than 10 years. Illinois passed a similar measure last year, and Nevada approved a law to allow teaching licenses for deferred-action youths.

A new California law allows professional and commercial licenses for anyone with a taxpayer identification number, regardless of their immigration status.