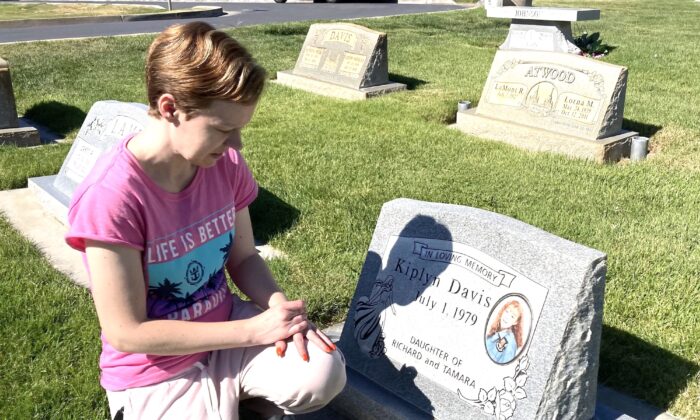 Karissa Lords of Spanish Fork, Utah, kneels beside a monument to her older sister, Kiplyn Davis, who went missing on May 2, 1995 and is presumed dead. Her remains have yet to be found. (Allan Stein/The Epoch Times)
US

SPANISH FORK, Utah—The day 15-year-old Kiplyn Davis went missing in May 1995, her family turned on the porch light to serve as a beacon of hope.

It’s been on ever since.

“We won’t turn that light bulb off until we have her body underneath [her] monument at the cemetery.”

Four days before Kiplyn’s 43rd birthday on July 1, her dad still hopes to locate her remains and finally be at peace.

“I don’t care about anything else now. I care about bringing [Kiplyn’s] body home,” Davis said.

The worst of it is knowing the man who killed his daughter may know where she is but refuses to talk.

And in 2026, Timmy Brent Olsen, convicted in 2011 of Kiplyn’s death, will be set free from prison after serving a 15-year sentence for manslaughter.

Through his attorney, Olsen claimed he saw an unnamed person hit Kiplyn in the head with a rock, killing her, and that he helped bury her body in Spanish Fork Canyon.

Despite a massive search of the remote canyon area, authorities have yet to locate the girl’s remains.

“There’s not much more we can do unless someone comes forward and tells us something. We never give up hope,” Davis told The Epoch Times.

In February 2011, Olsen pleaded guilty to the lesser charge of manslaughter rather than go on trial for first-degree murder. Prosecutors agreed to the plea bargain provided Olsen revealed where he buried Kiplyn’s body.

Davis said Olsen reneged on the deal even though he begged him to honor the agreement.

“He told [authorities] I don’t have anything to give. That’s the way it ended,” Davis said.

“You always have things running through your mind. I think [Olsen] is protecting somebody. I don’t think it’s one of the people he was with when he took her. I don’t know why he’d want to stay in jail to protect somebody unless they were close.”

Police charged four other men with lying to authorities in connection with Kiplyn’s death.

“She knew them. She trusted them. She wouldn’t have gone with them [otherwise],” Davis said.

“There was a rumor [Spanish Fork Canyon] is where they took her and left her up there. They did a massive search for her—closed off the road, dug for her, but nothing came forward.”

Kiplyn was last seen on May 2, 1995, when she failed to attend her fourth and fifth-period Spanish Fork High School classes. Her parents grew concerned when she didn’t return home by 4 p.m., and went out looking for her.

Early that morning, Richard Davis said that Kiplyn was late getting ready for a driver’s education class and didn’t want to go to school. She began to argue with her parents Richard and Tamara.

“You’re going to school. Get your makeup and get to school,'” Davis told her, which made her angry.

While authorities thought Kiplyn ran away at first, months went by before the investigation into her whereabouts moved forward with the help of federal investigators.

“She was happy. She had no intention of running away. She always told us where she went,” Davis said. “I talk about the last thing I said to my daughter, and I have to live with that.”

Karissa Lords was nine years old when her older sister disappeared. She remembered Kiplyn as a “bubbly person” who made friends quickly.

“She made people feel welcome. She was that kind of person who was a social butterfly. I looked up to her.”

Lords, now 36, admitted when her sister went missing, “I took it pretty hard.”

“It’s not been easy for me knowing what happened. I suffered from depression because of it. It wears on you.”

“Christmas comes and that’s super hard. It’s hard reality being a little kid thinking, maybe, just maybe, you’re going to get this wish, but it’s not going to happen.”

Desperate for answers, the family even contacted psychics hoping they might lead them to Kiplyn’s remains.

On May 2, 2018, the family held a candlelight vigil in memory of Kiplyn.

It was raining, just like the day she went missing. But like her personality, the clouds eventually went away, Lords said.

Karissa set up a website, “Find Kiplyn Davis,” to keep her sister’s memory alive with the hope that someday, someone will come forward with information that leads to Kiplyn’s remains.

“People ask me questions, ‘Have you looked here?’ I [tell] my dad we should check that out. Mostly nothing,” Lords told The Epoch Times.

Lords said in spite of her years of pain and anguish she has forgiven her sister’s killer.

Her father, however, hasn’t reached that point yet.

“There’ll never be any forgiveness. [Olsen] hurt my daughter. But there’s nothing I can do about it,” Richard Davis said.

At Spanish Fork Cemetery, the family has placed a monument to Kiplyn embossed with her picture—her dad’s favorite.

Her memory, and his faith, keeps him hopeful.

“I know Kiplyn’s OK. She’s happy. She’s not being hurt anymore [but] there’ll never be peace in our home [nor] any closure until we bring her home,” Davis said.