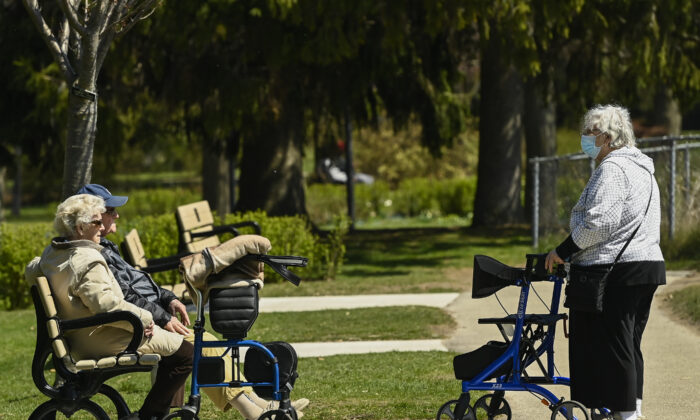 A senior couple chat with an elderly woman in Toronto in a file photo. (The Canadian Press/Nathan Denette)
Canada

Nearly One Million Canadians Projected to Live With Dementia by 2030: Study

Almost one million Canadians will be living with dementia by 2030, with that number rising to some 1.7 million by 2050, a new study warns, noting that if left unaddressed, this situation will have tremendous impacts on the economy.

The study, titled “Navigating the Path Forward for Dementia in Canada,” is the first of a series of three reports to be released by the Alzheimer Society of Canada. It is a simulation study aimed at projecting the number of Canadians who will develop dementia over the next 30 years. The two other reports are expected in the coming months.

As the number of patients grows, more resources and manpower must also be put into their care. The study found that in 2020, there were an estimated 350,000 care partners–family members, neighbours, and friends–for people with dementia. Putting in an average 26 hours of care per week, this number of work hours is equivalent to 235,000 full-time jobs, according to the study.

Translating these hours into dollar figures, even at a federal minimum wage of $15.55 per hour, the care provided by family and friends is greater than $7.3 billion, the study said.

“The impact of dementia on Canada’s health-care system will be huge. In Canada, family doctors and nurse practitioners are primarily responsible for diagnosing and providing health care for persons with dementia,” said Dr. Brian Goldman. “Within the offices and clinics of primary care providers, patients with dementia will require a disproportionate share of their time.”

“The provinces and territories need to incentivize family doctors and nurse practitioners to provide customized care to these highly complex patients.”

The study noted that aging is the primary factor leading to dementia.

“The largest estimated increases in dementia are in the older age groups, with the number of people over 85 with dementia expected to increase almost 30% faster than the overall number of cases in the population,” the study said, pointing to the latest Statistics Canada report showing that the number of Canadians over 85 is expected to triple by 2046.

The study, however, noted that “dementia is not a normal part of aging,” and while some risk factors for dementia cannot be changed, such as age, sex, and genes, a number of other factors can be changed or modified over a person’s life to lower the risks.

In early life (up to age 45), less education is associated with greater risk of dementia. In midlife (age 45 to 65), risk factors that individuals can make effort to change or modify include hypertension, high alcohol intake, and obesity. In later life (age 65 and older), those risk factors include smoking, depression, social isolation, and inadequate physical activity.

The study said even small delays in dementia onset across Canada can make a significant difference nationally.

“Even a delay of 1 year could result in almost 500,000 fewer new cases by 2050; this would make a huge difference in national dementia rates over the next three decades,” it said. [page 37]

Among the various types of dementia, the study said Alzheimer’s dementia will continue to be the dominant type of dementia in Canada in the coming decades, with over 1.1 million people affected by 2050. Projections show that an estimated 460,000 people will be living with vascular dementia in 2050, and 300,000 people are forecast to live with other forms of dementia by that time.