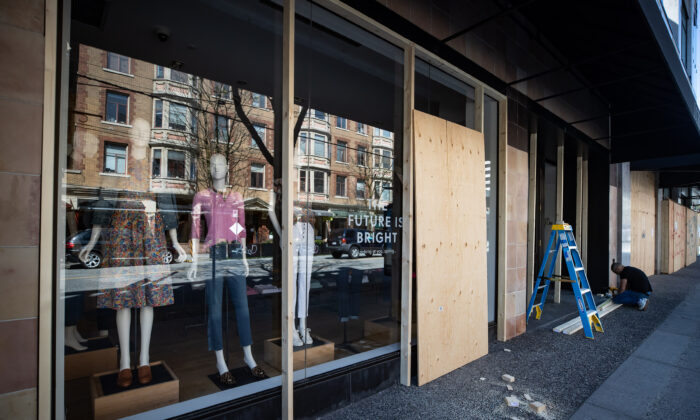 A worker boards up a closed clothing store in Vancouver, on April 16, 2020. (The Canadian Press/Darryl Dyck)
Canada

Nearly one-in-five small business owners are preparing to permanently close under the pressure of pandemic-related debts, lagging revenue, and mounting costs, according to a poll from the Canadian Federation of Independent Business (CFIB).

In a recent survey of its members, the CFIB found that 54 percent of small businesses are still reporting below-normal revenues and 62 percent are carrying unpaid debt taken on during the pandemic—which averages $158,000—according to the latest available estimates.

When respondents were asked if they agreed with the statement “We are actively considering bankruptcy or winding down our business,” 17 percent gave an affirmative answer.

“Small firms are in for a rough recovery, but governments can step in and help by taking concrete measures,” CFIB President Dan Kelly said in a statement issued on Aug. 18. “Governments need to decide whether they will make the problem worse by raising taxes or take immediate actions to keep many businesses from disappearing for good.”

The CFIB found that only 10 percent of Canada’s small business owners would choose to file for bankruptcy if they were unable to keep their doors open, while nearly half (46 percent) of businesses at risk of closure would simply stop operating rather than go through the bankruptcy process.

“Bankruptcy is a major issue for Canadian small businesses in all sectors but it does not measure the full scope of the problem,” the CFIB said.

“Of all the methods business owners would use to close their business due to financial hardship filing for bankruptcy is only a small piece.”

The Office of the Superintendent of Bankruptcy last year reported the number of insolvencies in Canada actually fell seven percent from 2020 to a total of 92,572, according to Blacklock’s Reporter.

“Insolvency is a lagging indicator,” Superintendent Elisabeth Lang said while testifying at a House of Commons finance committee meeting on July 7, 2o2o. “If, as many are suggesting, we face a recession and our GDP goes down, our historical data shows that we will see an increase [in insolvencies], but I don’t think it will be sudden. I’m not sure it will be a crisis, but it’s very difficult to predict.”

“We are keeping a very close eye on insolvency rates compared with the last significant Canadian recession in 2008,” Lang said at the time, in regards to government readiness for a likely increase in insolvency filings under the COVID-19 pandemic.

Insolvencies following the 2008 financial panic peaked at 158,441, according to a 2016 federal report titled “Ten-Year Insolvency Trends In Canada.”

“Volumes were noticeably affected by the 2008-2009 recession,” the report said.