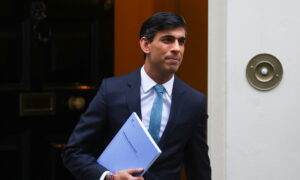 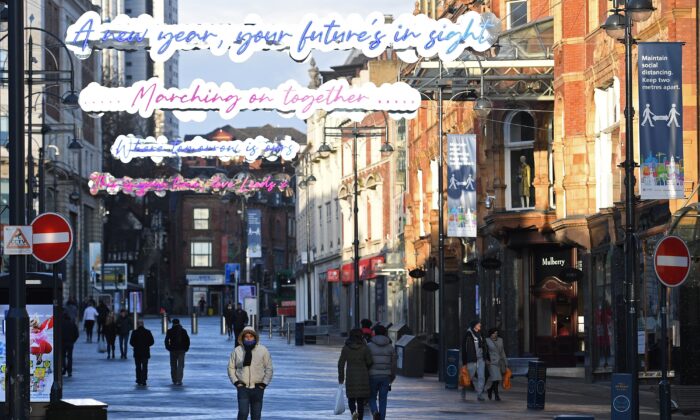 Pedestrians walk along an empty shopping street in Leeds, northern England, on Jan. 6, 2021, on the second day of Britain's national lockdown to combat the spread of COVID-19. (Oli Scarff /AFP via Getty Images)
UK

Nearly 1 in 20 British small business owners are planning to close their firms over the coming 12 months as a result of the CCP virus pandemic, a business group said on Monday.

In a survey of 1,400 small firms, the Federation of Small Businesses (FSB) found that just under 5 percent of the businesses expect to close this year.

If this proportion can be extrapolated to all the UK’s 5.9 million small firms, the country could be on course to lose more than a quarter of a million businesses this year, the FSB said.

Some 23 percent of small firms have reduced the number of people they employ over the past three months, and 14 percent say they will be forced to cut their workforce over the next quarter.

The real situation could be worse, as the survey was conducted in December, before the latest national lockdown was announced last week, the group suggested.

Some 16.8 million people work in smaller businesses across the UK, according to figures from the Department for Business, Energy and Industrial Strategy (BEIS).

The FSB attributed the grave situation to the current level of government support.

“The development of business support measures has not kept pace with intensifying restrictions,” said FSB National Chairman Mike Cherry. “As a result, we risk losing hundreds of thousands of great, ultimately viable small businesses this year, at huge cost to local communities and individual livelihoods.

“A record number say they plan to close over the next 12 months, and they were saying that even before news of the latest lockdown came through.”

Last week, Prime Minister Boris Johnson put the whole of England under lockdown, the third national lockdown since the COVID-19 pandemic began last spring, in order to curb the spread of a new variant of the CCP (Chinese Communist Party) virus, which the government said has a 50 to 70 percent faster rate of transmission.

The UK government has spent hundreds of billions of pounds on its response to the CCP virus pandemic, including the furlough scheme, support for the self-employed, tax cuts, and extra funding for schools and local councils.

On Jan. 5, Chancellor of the Exchequer Rishi Sunak announced an extra £4.6 billion ($6.2 billion) support package for retail, hospitality, and leisure businesses, which had been hit hard by new lockdown measures.

But Cherry said the government “needs to realise that the small business community is much bigger than these three sectors.”

“Company directors, the newly self-employed, those in supply chains, and those without commercial premises are still being left out in the cold,” he said.