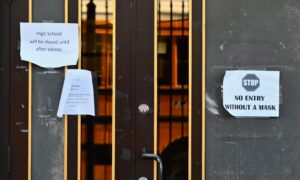 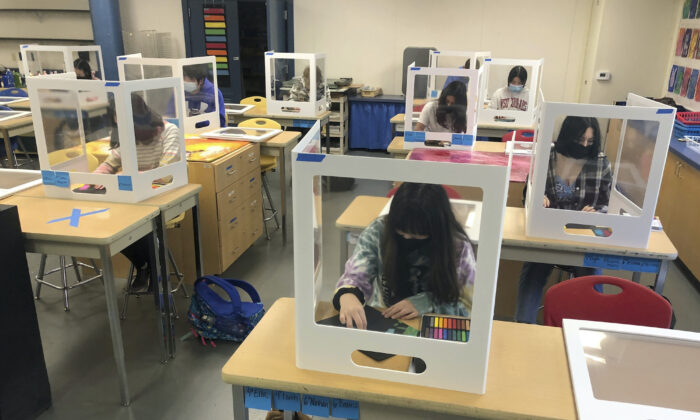 Socially distanced and with protective partitions, students work on an art project during class at the Sinaloa Middle School in Novato, Calif., on March 2, 2021. (Haven Daley/AP)
Health Education

Nearly Half of US K-12 Students Back to 5-Day-a-Week, In-Person Schooling: Tracker

Almost half of all K-12 students in the United States are at schools that have resumed five-day-a-week, in-person instruction, according to updated figures from a tracking organization.

Up from about 47 percent a week earlier, roughly 49 percent of U.S. primary and secondary students are attending so-called traditional schools, Burbio said on March 14.

At the same time, about 21 percent of students are attending schools that continue only offering virtual classes, down about 3 percent, while 30 percent attend “hybrid” schools, or schools that offer in-person classes but not five days a week.

The peak of students attending virtual-only schools took place on Labor Day 2020, with 62 percent of students having no option of taking physical classes. The figure dropped to just under 37 percent by early November 2020 before rising to 55 percent in January. Shortly after, another drop started. The 21 percent is a new low since March 2020, when schools across the nation closed down due to the COVID-19 pandemic.

The increase in students being able to attend in-person classes stems from developments in California, where a number of school districts have introduced hybrid learning plans, as well as states across the Midwest and Northeast, such as Ohio, Michigan, Connecticut, and Pennsylvania.

For instance, the Keystone Oaks School District in Pennsylvania recently announced that both middle school and high school students would be moving to four days of in-person instruction on March 8, while students and parents in Cherry Hill, New Jersey, received a similar notice. As of March 8, Detroit public school students could receive instruction in-person.

Like many districts offering in-person learning, parents can opt to keep their students away from schools and continue taking classes online.

“These state level directives (Iowa and West Virginia being two other examples since January) come in a variety of formats: bills from the legislature signed by the Governor, mandates by the State Department of Education, or Executive Orders from the Governor,” Burbio said in its update.

“We see immediate impact at the district level when these orders occur through references in Superintendent letters, accelerated learning plan introductions, and local board of education votes. We can see these tools playing a role in school planning for this coming Fall.”

The K-5 mandates in particular will lead to primary school students without access to in-person instruction dropping sharply by early April, “as only a handful of West Coast cities will be left not offering K-5 students any in-person options,” Burbio added.

The update came after several large teachers unions reached tentative agreements to return to classrooms. U.S. Secretary of Education Miguel Cardona, meanwhile, said last week that he thinks students could be back in school five days a week by the spring.

“I know [there are] schools that are functioning all day, every day, five days a week, for all students currently, and we need to continue to grow and make sure that we’re giving students an opportunity to be in school as much as possible,” Cardona said during an appearance on CNN, adding that his “biggest priority” is making sure the Department of Education is “doing everything we can to move from remote learning.”