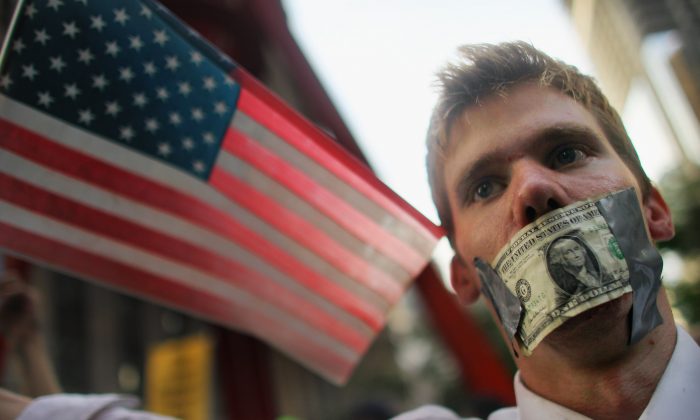 Americans aged 18 to 29 face an unemployment rate of 8 percent compared to 3.7 percent for those over 29, a study says. A protester wears a dollar bill over his mouth at the start of a march by demonstrators opposed to corporate profits on Wall Street in New York City on Sept. 30, 2011. (Mario Tama/Getty Images)
Opinion

Belief in the American Dream among millennials is dimming as the nation’s largest generation continues to face steep socioeconomic barriers despite overall economic recovery, according to a new report.

Generation Opportunity, a nonprofit organization advocating limited government to spur opportunity for young Americans, reported Tuesday, Jan. 12, that for the first time in U.S. history, a younger generation may be left worse off than the one preceding it.

For the first time in U.S. history, a younger generation may be left worse off than the one preceding it.

The study found that millennials face record-high levels of student debt along with higher unemployment and poverty levels and lower personal income than the two previous generations at the same points in their lives.

These barriers have left nearly half—48 percent—of millennials convinced that the American dream is dead, the report’s authors wrote, referencing a recent Harvard study.

The Federal Register listing government regulations, for example, has grown from nearly 10,000 pages in 1954 to over 80,000 in 2013. The report, which credits five authors, said these “excessive” rules have restricted job creation, leading to high unemployment rates among young adults.

Currently, 18- to 29-year-olds face an unemployment rate of 8 percent compared to 3.7 percent for Americans over 29.

The strain for young Americans to secure a job has excluded many from the workforce, the report found, leading to an all-time low labor force participation rate of 71 percent among 18- to 29-year-olds. More than 1.8 million young adults have given up looking for a job altogether.

Shrunken job opportunities also spiked poverty levels among millennials, the report said. In 1979, only 8 percent of the baby-boom generation was living in poverty. Fast-forward to 2013, and that number has doubled to 16 percent among millennials.

“These negative trends are caused by years of government intervention disrupting economic growth in countless parts of our lives,” the authors of the report wrote.

Many Millennials See Themselves as Self-Absorbed, Wasteful

The authors also fault the government’s reach in the nation’s higher education system for skyrocketing levels of student debt.

While young Americans are graduating college at a national high, college tuition has increased by over 500 percent since 1985, “rising significantly faster than the cost of health care, gasoline, shelter, and food,” the study found.

This has left nearly 70 percent of the graduating class of 2014 with student loan debt averaging at nearly $30,000 per borrower.

The report blames these “economic hardships” for driving millennials to marry later than ever before and causing the lowest level of homeownership on record among Americans under 35 years old.

As government continues to grow, young Americans are beginning to believe the American dream is dead.
— State of the Millennial Report

“As government continues to grow, young Americans are beginning to believe the American dream is dead,” the authors wrote. “To reverse this trend, we need to reduce excessive government regulations that stop job creation. We need to simplify the tax code so millennials can start new businesses without Uncle Sam intervening.”

Generation Opportunity, part of a network of organizations begun by entrepreneurs Charles and David Koch, was founded in 2011 as a grassroots outreach group to involve young Americans in policy debates.