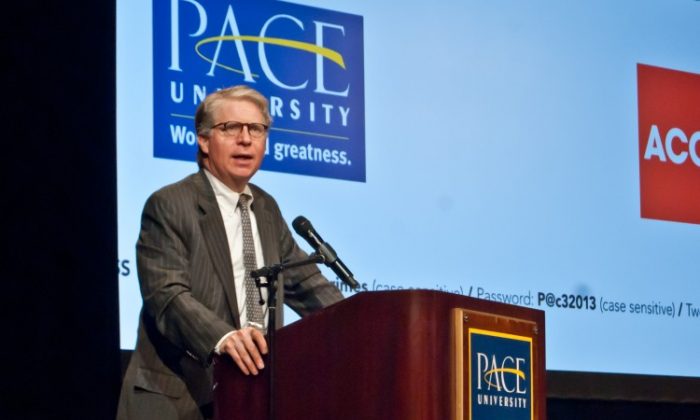 NEW YORK—Prosecutions for cybercrime and identity theft in Manhattan have increased by 50 percent in the last five years, and criminals have been rigging ATM machines and scanning credit cards when no one is looking.

You may want to think twice the next time you need money from a curbside ATM, deciding instead to pay for a meal with a credit card.

“Cybercrime is the fastest growing crime trend in New York, and around the country,” said Manhattan District Attorney Cyrus Vance, during a symposium called “Cybercrime in the World Today 2013” at Pace University on Feb. 28. “The Manhattan police precincts now record cybercrime and identity theft as their most frequently reported complaints.”

According to Vance, cybercrime is not just a growing trend—it is a fundamental shift in the way modern crime works. Modern crime has already reached a point where nearly every crime in the city involves a cybercomponent.

“It is rare that a case does not involve some kind of cyber or computer element that we prosecute in our office—whether it is homicide, whether it’s a financial crime case, whether it’s a gang case where the gang members are posting on Facebook where they’re going to meet,” said Vance.

The trend is not just small-time crooks acting on their own, either. Many local criminals are working with international hackers—often hired guns in the former Soviet Bloc who can help them con people from the other side of the world. Vance said that organized crime rings are also getting in on the game and are realizing that cybercrime is less risky—yet more lucrative—than even the drug trade.

The situation is not all doom and gloom, however, and New York City is helping to lead the way in a cross-department battle against cybercrime.

“So what do we do about this, how can we stop it, what kind of recovery plans do we need to have in place?” said Pace University President Stephen Friedman during a speech at the symposium, citing recent news of cybercrime and Chinese hackers targeting U.S. critical infrastructure.

“I believe that answering those questions requires the kinds of cooperation and partnership that we see here today,” Friedman said.

The city is getting help from the Secret Service, the Department of Homeland Security (DHS), local businesses, and others. This system of cooperation was actually set up in 2001 when President George W. Bush signed the USA PATRIOT Act (H.R. 3162) into law. The act established the Electronic Crime Task Forces (ECTFs) under the Secret Service.

According to the Secret Service website, “The concept of the ECTF network is to bring together not only federal, state and local law enforcement, but also prosecutors, private industry and academia.”

The basic purpose of the ECTF, it states, “is the prevention, detection, mitigation and aggressive investigation of attacks on the nation’s financial and critical infrastructures.”

Paul Mahon, assistant special agent in charge of the U.S. Secret Service New York Field Office, who moderated the Pace event, said that his office is available to help local businesses with cybersecurity.

“For private industries, the Secret Service—through DHS and through the PATRIOT Act—has been mandated to reach out to you and help in any way that we can,” Mahon said. “There’s no cost associated with it.”

“If a small company does want to talk about their security system, we can give them free advice on how to best protect [their networks],” he added.

The Manhattan District Attorney’s office also received $4.2 million last year to build a cybercrime lab. It works as the city’s crime scene investigation lab for computers, where investigators can sift through data for evidence and search hacked hard drives for digital fingerprints.

Working with digital evidence is not easy, however. Computer forensics can be even more difficult to work with than physical evidence.

“You have to prove to the court that the data hasn’t been altered, that it does stand, and the accused was the one who should be standing trial,” Mahon said. “It’s a tumultuous process.”

At the end of the day, however, cybercrime is a new field for both criminals and law enforcement. Vance said that while more crime in New York is moving to the wires, through the cooperation between businesses, academia, and local and federal law enforcement, “we are in Manhattan having a lot of success.”

He said that when most of us think of “crime scenes,” television shows like “Law and Order” may come to mind—with yellow tape and the flashing lights of police cars. “But I think we all know today, the crime scene we think of is a different type of crime scene,” he said.

“And now when I look back to the 1980s, when I was an assistant DA, we could not have had a more different picture of criminal trends in Manhattan than we do today,” Vance said. “Today, it’s identity theft and cybercrime. That’s what’s happening in every neighborhood around Manhattan, and I think, around the country.”