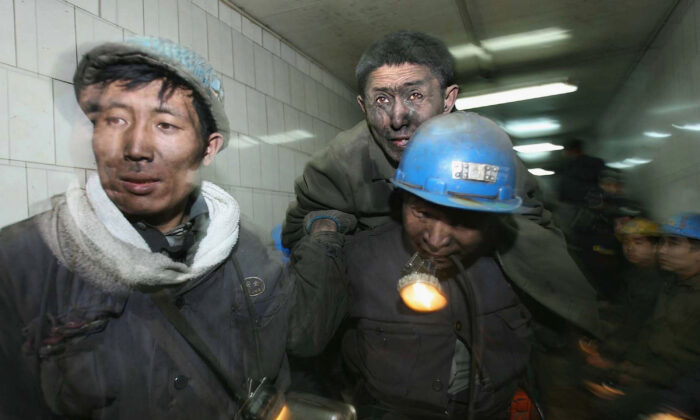 Rescuers carry a miner out after he was trapped, following a blast accident that occurred at Dongfeng Coal Mine in the suburb of Qitaihe city of Heilongjiang Province, China, on Nov. 28, 2005. (China Photos/Getty Images)
China

Around 22 percent of coal mines in China’s coal hub of Shanxi Province were recently ordered to stop operating due to major safety issues. One China observer said that problems persist due to a lack of oversight and corruption among authorities, and safety rules are regarded as a mere formality.

From January to July, Shanxi produced about 675 million tons of raw coal, the highest among all provinces, accounting for about 30 percent of China’s total output in the same period. Suspending the coal mine operations in the province is a big deal as other industries would be affected.

Shanxi is an important part of China’s coal supply network. On Sept. 29, Shanxi signed coal contracts with 14 provinces, autonomous regions, and municipalities, and agreed to supply coal from October to the end of December.

From January to August this year, seven accidents occurred in Shanxi coal mines. A total of 204 mines, or 22.4 percent of the province’s mines, were ordered by local authorities to stop operating in order to “rectify” the problems.

At around 5:00 p.m. on Sept. 22, water penetrated the wall of the inclined shaft of an underground mine owned by Wu Guan Tun Coal in Datong city. The water was 1,300 feet away from the shaft wall. The inclined shaft of an underground mine is used to transport materials, equipment, and workers. The maximum water inflow was about 28,200 cubic feet per hour, leading to flooding of some mining areas. Around 134 people were evacuated, but no injuries were reported.

In September and October, the Shanxi Coal Mine Safety Supervision Administration carried out an inspection on all the coal mines in the province and focused on water damage.

General inspections were also carried out without prior notice. On July 27, six coal mines in Jinzhong city received unannounced visits by the CCP’s Safety Commission.

A public investigation video revealed problems at some coal mines in Shanxi.

During an inspection of Jingfu Coal Industry Company in Shouyang county, the video showed that a top section of the coal mining area had a layer separation problem that could lead to a major accident at any time. Nine out of 10 hydraulic support pressure gauges, which are used to monitor the overall pressure of the support system in the coal mining face, were broken. A coal mining face is where the mining activity takes place. About 90 percent of the underground fire extinguishers were not in working order.

In the mine, 32 hidden dangers and problems, such as electrical equipment failure, were found. Jingfu Company produces 900,000 tons of coal per year.

Many problems were also found at the Beishan Coal Mine in Yuci district. In the production area of the mine, it was found that the gas pressure and gas content were not measured in the correct position. The gas content reached a dangerous level, but no action plan was in place to address the problem.

Furthermore, the company failed to provide a gas disaster analysis and management system, nor work out an emergency plan for the shutdown of the main ventilator. There were also problems with water control measures at two production mines.

The Coal Mine Safety Supervision Administration of Shouyang county was also found to have three major problems, according to the aforementioned video. First, the administration did not implement a safety plan for coal mine production. Second, no personnel was assigned to review safety-related technical records on a regular basis. Third, in the event of a natural disaster, the administration only issued orders to suspend production, but overlooked the safety of workers such as providing an evacuation plan.

Beijing’s Mine Safety Supervision Bureau said that there are many outstanding issues that are very serious among the coal mines in Shanxi. These include the following: certain safety protocols in emergency situations, such as in the event of a gas leak, are not in place; and there is a lack of supervision of workers.

On the surface, authorities have been doing their jobs by addressing the issue of coal mine safety. For instance, the Shanxi provincial government issued a “Three-Year Plan for Special Rectification” in May 2020, and its Emergency Management Department conducted “special safety inspections” of all coal mines in the province in September and October.

In addition, the Shanxi Coal Supervision Bureau and Shanxi Emergency Management Department announced in mid-September its decision to inspect every coal mine under its jurisdiction. Coal mines are required to do their own safety inspections before inspectors are sent out to their work sites.

The “Three-Year Plan for Special Rectification” is a nationwide campaign. Inner Mongolia, China’s second-largest coal producer, is also making “solid progress,” according to a report by the state-run China Emergency Response Network. However, the Inner Mongolia Coal Mine Safety Administration reported on Sept. 30 that coal mines operated by the National Energy Group in the region had suffered three fatal accidents in 18 days.

Li Yuanhua, a former associate professor of education at Capital Normal University in Beijing, believes that the Three-Year Plan is merely a formality.

“Why is it a pseudo-proposition? Because they have done this many times, but the safety problem has not been solved,” Li told The Epoch Times.

Li further pointed out that although the Chinese Communist Party (CCP) stipulates rules, these rules are not enforced. The unsafe mines are able to get permission to restart operations because local governments pursue tax revenues, and there is collusion between government and business entities.

“The crux of the problem is this: Do they value miners’ lives or coal? The fact that many coal mines are still operating without safety [regulations in place] is related to the corruption of the CCP. Some coal bosses in Shanxi can start their mines without safety [regulations] after bribing officials. We only talk about the security issue now, but there are also a series of problems such as destructive mining and environmental pollution.”

“CCP officials are willing to carry out small campaigns like the Three-Year Plan. [By doing this] they can satisfy the leadership as well as take money from the lower levels. The point is that no one really cares about the safety of miners,” Li said.

“If a nation respects life, the result will be completely different. In Australia, the government fines for neglecting safety [protocols] are very high. If any enterprise dares to ignore [safety protocols], it’s almost impossible for it to keep running, so no one dares to ignore [the rules]. Why are there so many people who dare to ignore [safety] under CCP rule? Because the cost of neglecting human life is lower than the cost of security.”

“The CCP has no respect for life,” Li said. “So the corporates’ approach is to make money first. If something goes wrong, use money to fix it; if nothing goes wrong, they just get away with it. It’s the inaction or disorderly actions of the communist regime that encourages coal companies to do this.”