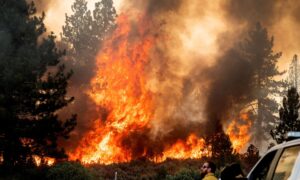 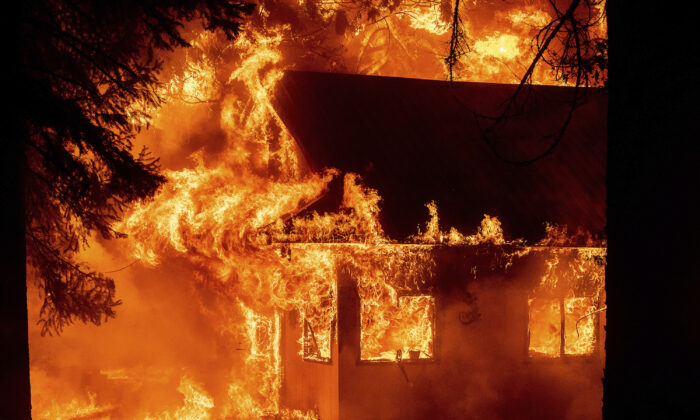 Flames consume a home as the Dixie Fire tears through the Indian Falls community in Plumas County, Calif., on July 24, 2021. (Noah Berger/AP Photo)
US News

Nearly A Quarter Million Acres Have Burned In California Wildfires

Massive wildfires have burned nearly a quarter million acres in California, resulting in thousands of evacuations, authorities have said.

The Dixie Fire, which started on July 13, has burned over 240,000 acres and is 35% contained and the cause is still under investigation, according to the Incident Information System. Over 4,000 people have been placed under evacuation orders in Plume and Butte Country according to the California Department of Forestry and Fire Protection (Cal Fire).

Over 6,000 firefighters are working to contain the Dixie Fire, which has burned 45 buildings and threatened 10,000 more, according to the Cal Fire. Cal Fire said it expects forest fire behavior to increase as the region faces ongoing dry weather and excessive heat, but expects full containment of the fire by mid-August.

“Last night was kind of the calm before the storm,” interagency fire behavior analyst Dennis Burns said in a press conference Monday, the Sacramento Bee reported. “We’re moving into a much warmer, drier period. We’re looking at the potential of seeing fire behavior fairly similar to when the fire started,” Burns added.

California’s largest fire, the August Complex, occurred in August 2020 and burned over 1,000,000 acres and killed one person, Cal Fire reported. The Dixie Fire is the states 11th largest fire and zero deaths have been confirmed.

There are now 90 fires throughout the U.S. with almost 2 million acres burned across 13 states, according to The National Interagency Fire Center. The Bootleg Fire in Oregon is currently the nation’s largest wildfire burning over 413,762 acres with 84% containment, according to the Incident Information Systems.