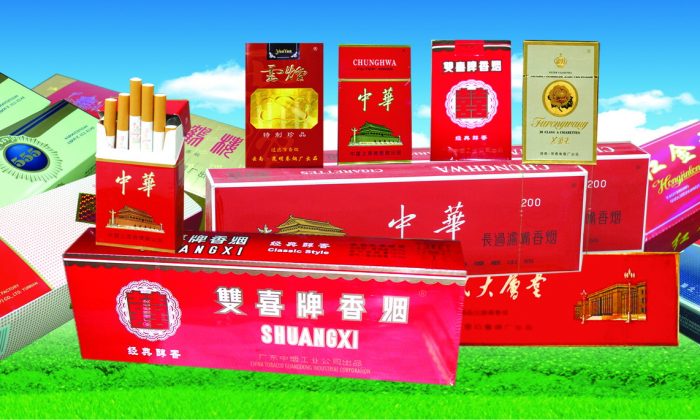 A selection of Chinese cigarette brands. A new U.S. study has revealed that almost 9 out of 10 young children in China can recognize cigarette trademarks. (Weibo.com)
China

A new U.S. study has revealed that almost 9 out of 10 young children in China can recognize cigarette trademarks.

The Journal of Pediatrics research paper looked at 2,423 children aged 5 to 6 years old in low- to middle-income countries where a large number of adults smoke, including China, India, Russia, and Brazil.

The scientists found that 68 percent of all the children studied knew at least one cigarette brand name, and among the Chinese this rose to 86 percent.

“Previous studies show that children and adolescents who are highly exposed to pro-smoking messages are more likely to smoke,” said study lead author Dr. Dina Borzekowski at the University of Maryland, according to a press release.

“It should be of great concern that the majority of very young children in our study were familiar with at least one cigarette brand. Even in households without smokers, children could identify tobacco logos.”

Chinese netizens commented about the findings on their Sina Weibo microblogs.

One said: “I could easily recite 20 to 30 kinds of cigarette brands and their prices when I was little, because I was often asked to buy cigarettes for my father and uncles.”

Another remarked: “Baijiang Cigarettes have been popular for 15 years running. If all the packets were put together, they would go round the Earth 11 times. It’s the No. 1 choice for most teenagers, middle-aged people, poor youths, and hobos.”