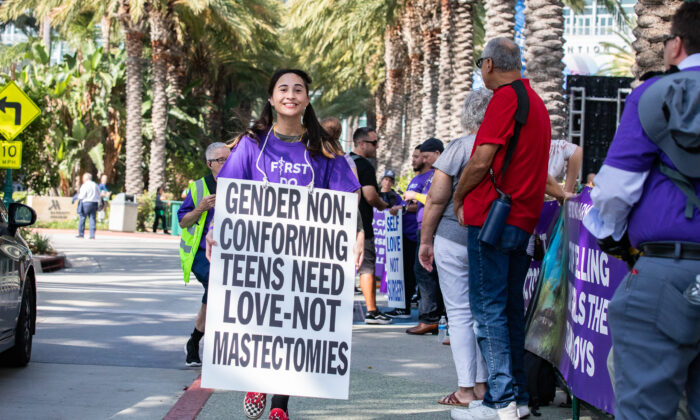 A new survey of voters who say they are likely to go to the polls on Nov. 8 finds the vast majority of them—including 53 percent of self-described Democrats—oppose administering puberty-blocking drugs to minors.

The survey was conducted by the Atlanta-based Trafalgar Group. The group asked 1,079 likely voters if they believed that “underage minors should be required to wait until they are adults to use puberty blockers and undergo permanent sex change procedures” and found that 78.7 percent of the respondents believed minors should have to wait to undergo sex change procedures.

At 84.6 percent, independents who responded to the survey were almost as solidly in favor of making minors wait until they reach adulthood as the Republicans.

Women support the wait by 73.1 percent, while men support it even more strongly at 84.5 percent. Huge majorities of all major age groups in the survey support the wait, with the youngest group, 18- to 24-year-olds, showing the most backing at 92.3 percent.

The survey—which was conducted on behalf of the Houston-based Convention of the States—has a 2.9 percent margin of error and a 95 percent confidence level. Respondents were interviewed between Oct. 8 and Oct. 11.

Convention of the States President Mark Meckler said in a statement that the survey’s results confirm common sense.

“This polling confirms the obvious—the vast majority of Americans are not on board with the Far-Left’s sexual agenda, which is seeking permanently to mutilate the young and vulnerable. The idea that young people have to be 16 to drive, 18 to vote, and 21 to drink, and yet can undergo life-altering medical procedures in middle school defies common sense, and the American people see that clearly,” Meckler said.

“As the Biden Administration refuses to do the right thing for our children and take action to protect them from the horrors of the far-left agenda, it’s imperative that individual states—like what we see happening in Tennessee right now—step up and stand against it.”

Meckler was referring to a growing controversy that a Vanderbilt University clinic provides chemical treatments and physical surgeries for minors seeking to change their birth sex.

The Volunteer State’s Gov. Bill Lee and Sen. Marsha Blackburn (R-Tenn.) have called for investigations of the clinic. Earlier this month, Vanderbilt agreed to pause the medical procedures for minors, pending an internal review.