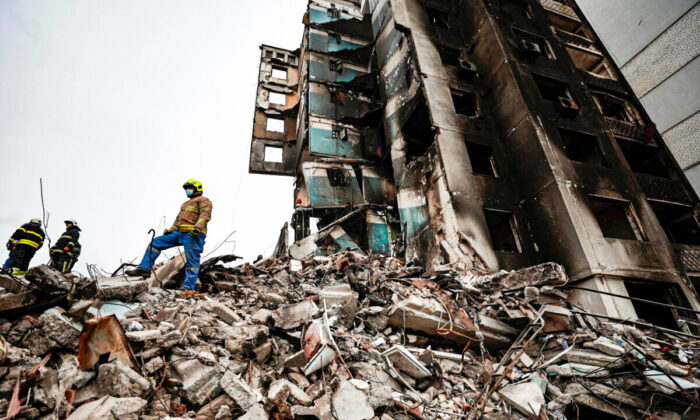 A rescuer stands on the rubble of a building destroyed by Russian shelling, as they start searching for bodies, in Borodyanka, Kyiv region, Ukraine, on April 10, 2022. (Zohra Bensemra/Reuters)
Russia-Ukraine War

The Ukrainian Prosecutor General on April 15 said it had found nearly 6,700 cases of “crimes of aggression and war crimes,” that have been committed during Russia’s invasion of the country.

On Twitter, the prosecutor general’s office said that 6,673 alleged crimes of aggression and war crimes have been registered as of Thursday, of which 6,483 included alleged breaking of the law and customs of war, 43 were related to planning, preparing for, or starting and waging an aggressive war and nine were connected with war propaganda.

The governmental body labeled the remaining 138 instances as “other.”

According to the prosecutor’s office, there are 575 “suspects” behind the “main case” of Russian aggression, including representatives of Russia’s military and political leadership.

They include ministers, deputies, military command, officials, heads of law enforcement agencies, investigators of war, and propagandists from the Kremlin, the prosecutor’s office said.

Meanwhile, another 3,040 “crimes against national security” were also announced.

Those alleged crimes included encroachment on the territorial integrity and inviolability of Ukraine, state treason, sabotage, and “other.”

Additionally, the office announced that there have been alleged crimes against children. A total of 198 children have been killed and 355 have been injured during the invasion, officials said.

Children in the Donetsk, Kyiv, Kharkiv, Chernihiv, Mykolaiv, Kherson, Luhansk, Zaporizhzhia, Sumy, and Zhytomyr regions, as well as the capital Kyiv, have been the most affected, the Prosecutor General’s Office said in a separate statement on Friday.

The office noted that officials are still working to collect data in areas where hostilities are ongoing, as well as temporarily occupied and liberated territories, and thus the figures are not final.

Amid the ongoing conflict in Ukraine, Russia has been accused of targeting civilians attempting to flee through so-called safe passages, as well as destroying civilian buildings, among other alleged crimes.

The latest figures came as the Chief Prosecutor of the International Criminal Court (ICC), Karim Khan, this week traveled to Bucha in Ukraine, where officials have accused Moscow of committing terrible war crimes in the city, including killing civilians.

The ICC began its investigation into possible war crimes in Ukraine on March 2, a week after Russian forces invaded.

“Ukraine is a crime scene. We’re here because we have reasonable grounds to believe that crimes within the jurisdiction of the ICC are being committed. We have to pierce the fog of war to get to the truth,” Khan said in a statement during his visit this week.

Khan also said the ICC has “reasonable grounds” to believe crimes within its jurisdiction are being committed.

Russian officials have denied killing civilians in Bucha and Kremlin officials have claimed that the scenes recorded in Bucha which attracted global attention are staged, branding it “another staged performance by the Kyiv regime for the Western media.”

At least 1,932 civilians have been killed and 2,589 injured in Ukraine since Russian forces entered Ukraine on Feb. 24, according to the U.N.’s Human Rights Office of the High Commissioner.

The majority of those civilians injuries were caused by “explosive weapons with a wide impact area, including shelling from heavy artillery and multiple launch rocket systems, and missile and airstrikes,” the U.N. said on Thursday.