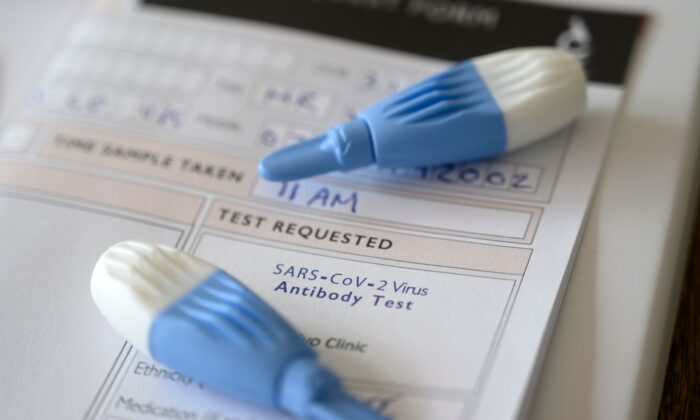 Lancets to prick the tip of the finger are pictured as part of a CCP virus antibody test kit in London on May 28, 2020. (Justin Tallis/AFP via Getty Images)
UK

Nearly 6 Percent of People in England May Have Had COVID-19: Study

Nearly 6 percent of people in England were likely infected with the CCP virus during the peak of the pandemic, researchers studying the prevalence of infections said on Thursday—millions more people than have tested positive for the disease.

A total of 313,798 people have tested positive for the CCP (Chinese Communist Party) virus, commonly known as the novel coronavirus, in Britain, 270,971 of which were in England.

This is just 0.5 percent of the English population.

However, a study by Imperial College London that tested more than 100,000 people across England for antibodies to the virus showed that nearly 6 percent of people had antibodies in their blood.

This suggests that 3.4 million people may have previously contracted the CCP virus by the end of June.

The research, which employed home antibody testing kits used by volunteers, is the largest study in the world for testing for CCP virus antibodies.

Antibodies are found in the blood of someone who has been infected with a disease in the past.

A positive antibody test for COVID-19 means the person may have antibodies resulting from an infection with the CCP virus, but could possibly mean they have been infected with a virus from the same family of viruses.

The antibody test does not show if a person is currently infected due to the time after infection that it takes for antibodies to form in the blood.

The volunteers in the study, which aimed to trace the spread of the disease across the country after the first peak, used a finger prick test to test a drop of their blood and carried out the procedure at home between June 20 and July 13.

The government said in a media statement published on Thursday that the finger prick test used in the mass antibody survey could, pending approval, be used in the future, and that antibody testing is key to assessing the extent of the virus among the population.

“Large scale antibody surveillance studies are crucial to helping us understand how the virus has spread across the country and whether there are specific groups who are more vulnerable, as we continue our work to drive down the spread of the disease,” Health Minister Edward Argar said in the statement.

“We don’t yet know that antibodies provide immunity to coronavirus, but the more information we can gather on this virus, and the easier we can make it for people to participate in these studies, the better equipped we will be to respond.”

Argar urged the British people to consider “signing up” to one of the number of studies being planned as part of a “national testing effort.”

The study results are consistent with other surveys, such as those conducted by the Office for National Statistics, which suggest higher levels of COVID-19 in the community during the pandemic than implied by daily testing statistics.

The Imperial College study found that among the most likely to have been infected were people living in London, people in large households, and people from Black, Asian, and other minority ethnic groups.

Health-care and care workers were also among the most likely groups to have been previously infected.

Prevalence of infections appeared to be highest in London, where 13 percent of people had antibodies, while minority ethnic groups were two to three times as likely to have had the virus compared to white people.

Prime Minister Boris Johnson had early on hailed antibody tests as a potential game-changer in tackling the pandemic. But while helpful for population studies, scientists say the margin of error for the tests makes them unreliable for use at the individual level.

The researchers also cautioned that although antibody tests were helpful for running such large-scale studies, they were not a guarantee of future immunity.

“There are still many unknowns with this new virus, including the extent to which the presence of antibodies offers protection against future infections,” said Graham Cooke, research lead at Imperial.

“Using the finger-prick tests suitable for large scale home testing has given us the clearest insight yet into the spread of the virus in the country and who has been at greatest risk.”