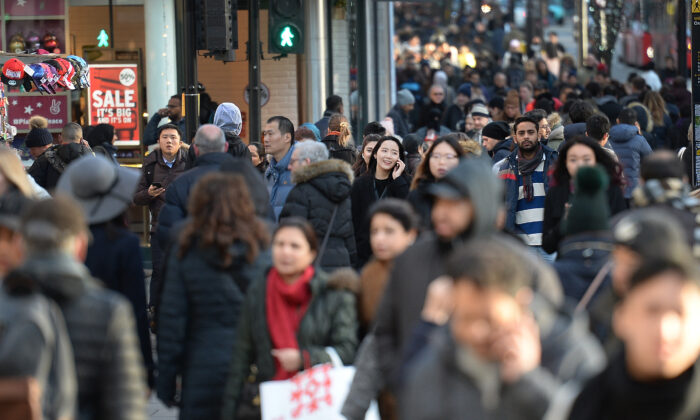 A crowd of shoppers in London in an undated file photo. Nearly 5 million people have been allowed to continue living and working in the UK under the EU Settlement Scheme so far, according to the latest official estimates. (John Stillwell/PA)
UK

Nearly 5 million people have been allowed to continue living and working in the UK under the EU Settlement Scheme so far, official statistics show.

As of the end of June, 4,908,760 people had been granted an immigration status to remain in the UK after freedom of movement ended following the Brexit transition period, according to figures released by the Home Office on Thursday.

The EU Settlement Scheme (EUSS) enables citizens of the European Union, other European Economic Area (EEA) countries, and Switzerland who were resident in the UK by the end of the Brexit transition period on Dec. 31, 2020, to obtain a UK immigration status.

More than 6 million applications were submitted between the launch of the scheme in March 2019 and the deadline on June 30, 2021.

According to the Home Office, the highest numbers of applications received were from Polish, Romanian, and Italian nationals.

Across all local councils in the UK, Newham in east London saw the highest number of applications to the scheme. More than 142,000 people applied for settled status there.

Following closely behind was Birmingham in the West Midlands, which received more than 138,000 applications.

Ending the freedom of movement was a key demand of many of those who supported Brexit.

The UK has now implemented a points-based immigration system, under which EU citizens no longer enjoy preferential treatment.

Those who failed to apply to the EU Settlement Scheme before the deadline have effectively lost their lawful immigration status. But late applications can be made under limited reasonable grounds and the government has said there is no cut-off date for doing so.

Anyone who does not apply and continues to live in the UK without being able to prove their immigration status could face enforcement action.