Nearly 3,000 Piglets On the Loose After Crash on Illinois Highway 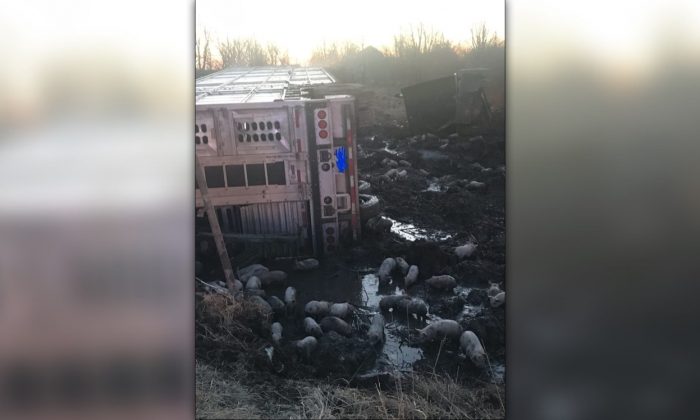 The scene of a road accident in which a semi carrying nearly 3000 piglets was overturned near milepost 127, about 2miles west of Casey, Illinois, on March 22, 2019. (Illinois State Police District 12 Effingham)
By Tom Ozimek

Around 3,000 piglets were involved in a highway crash when a semi overturned on an Illinois highway, causing the animals to either get loose or need rescuing from the damaged trailer.

The Illinois State Police warned drivers to use caution after the little pigs got loose on eastbound I-70 near mile marker 127 in Effingham, Illinois, on the morning of Friday, March 22.

Officials said in a statement that a crash involving an overturned livestock hauler caused the animals to scatter along the road, resulting in potentially hazardous conditions for drivers.

“I-70 travelers between Casey and Greenup use caution,” the Illinois State Police said.

“Troopers are on scene assisting with corralling the livestock,” they added.

*I-70 travelers between Casey and Greenup use caution*

Due to a traffic crash, nearly 3000 piglets are loose near milepost 127 (2 miles west of Casey). pic.twitter.com/s7zaJlF9oj

Aerial cameras captured footage of crews rounding up the escaped piglets and removing ones that were trapped in the truck.

Footage from the air of the piglet rescue was published by KMOV4.

No injuries were reported to either the driver or the animals.

An Arizona woman is sacrificing her comfort by having Saturday night sleepovers at an animal rescue shelter, in the hopes that it will get the animals adopted faster.

The Epoch Times reported that Melissa Gable, PR Manager for Foothills Animal Rescue on Scottsdale, near Phoenix, has been spending her Saturdays sleeping at the shelter and posting videos of the experience on the YouTube channel: Shelter Pet Slumber Party.

“My hope is that, eventually, people will start watching them and seeing the videos and sharing them and come and adopt the dogs,” she said.

Gable said the videos might show people how the cat or dog might act in a home environment, and how they might be used to sleeping on a bed with a person or in close contact with another animal. Each pet has a different preference and personality.

“It’s something that I really enjoy. A lot of people have kind of said I’m crazy for doing that … but as soon as I got here and saw the animals, then I wouldn’t want to be anywhere else but here.”

Foothill Animal Rescue was started in 1995 in Cave Creek, and it now has two locations in Scottsdale. After the opening of the second location, an adoption center, the organization said the number of pet lives that were saved increased by 66 percent.

According to the American Society for the Prevention of Cruelty to Animals (ASPCA), around 6.5 million pets enter animal shelters in the United States every year, while about 1.5 million shelter animals are euthanized.