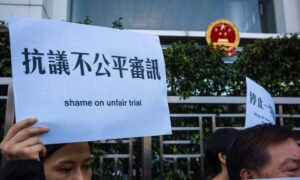 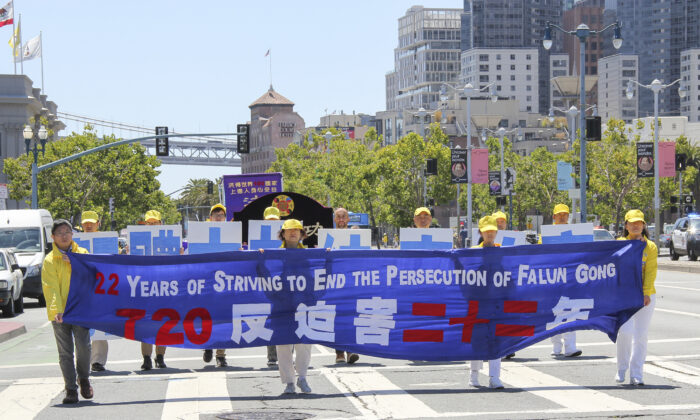 Falun Gong practitioners hold a banner calling for an end to the 22-year persecution of Falun Gong, during a parade in San Francisco on July 17, 2021. (Cynthia Cai/The Epoch Times)
China Human Rights

Chinese police harassed or arrested nearly 3,000 Falun Gong adherents in the recent two months, according to Minghui.org, a U.S.-based website that documents the Chinese communist regime’s persecution of Falun Gong.

Among the 2,941 individuals, 884 were arrested, 101 were put into brainwashing centers, a facility to make them renounce their faith, 34 were forced to take blood tests, and 17 were made to flee their homes.

Falun Gong, also known as Falun Dafa, is an ancient Chinese spiritual practice consisting of slow-moving meditation exercises and moral teachings that promote truthfulness, compassion, and tolerance in everyday life. According to official estimates, its popularity peaked in the late 1990s in China, with 70 million to 100 million adherents. However, the CCP has suppressed the group out of political motivations since 1999.

The CCP has carried out its “Zero-Out campaign,” a zero tolerance policy against Falun Gong that first appeared in Guizhou Province in March 2020, in multiple provinces across the country throughout July and August, according to Minghui reports.

In Linyi County, Shanxi Province, the local political and legal affairs committee led security agents, police officers, and governmental staff to harass Falun Gong adherents. They intimidated every practitioner with the communist party’s atheist political indoctrination and attempted to coerce them to renounce their beliefs.

On July 5, local authorities abducted Falun Gong practitioner Yao Kangqiang, a resident of Pingyi village in Beixin town. They took Yao to a brainwashing center located within Jinguo Hotel. The practitioner went on a hunger strike to protest the mistreatment. Two days later, he developed a condition and was released. But one day later, he was retaken. Currently, he has been forced to flee his home to escape police harassment.

The report said that 229 of the clampdown victims were senior citizens aged 65 and older.

Falun Gong practitioner Jiang Xinying is a 65-year-old resident of Jinan City in eastern China’s Shandong Province. On July 22, seven to eight officers from Qianfoshan Police Station burst into her home, abducted her, and confiscated some of her belongings.

Jiang has already been twice imprisoned in the CCP’s labor camp system for a total of three and a half years. There, her health plummeted, and she suffered from tuberculosis and a severely bent back.

In northeast China, He Wencui is an 86-year-old retired professor at the College of Forestry of Beihua University in Jilin City, Jilin Province. On July 16, seven people from Taishan Road Police Station and the local neighborhood committee raided his home. They seized his Falun Gong books and related materials, and abducted him and a fellow practitioner that was looking after He.

Also in Jilin Province, practitioner Ahn Bokja, an 82-year-old retired associate professor, was sent to the Yanji Detention Center in late August. Four years ago, she was given a 3-year sentence to serve outside of prison. Now, she faces prosecution again.

In the northern province of Hebei, 85-year-old Falun Gong adherent Zhang Wanxin is a resident of Tangshan City. On Aug. 19, police officers abducted Zhang while he was discussing Falun Gong with locals at a local fair in Luannan County. The elderly man was released on “bail pending trial.”

Soon afterward, however, he was sentenced by a local court to one year and six months prison, with a 2-year probation period and a fine of 1,000 yuan ($155).