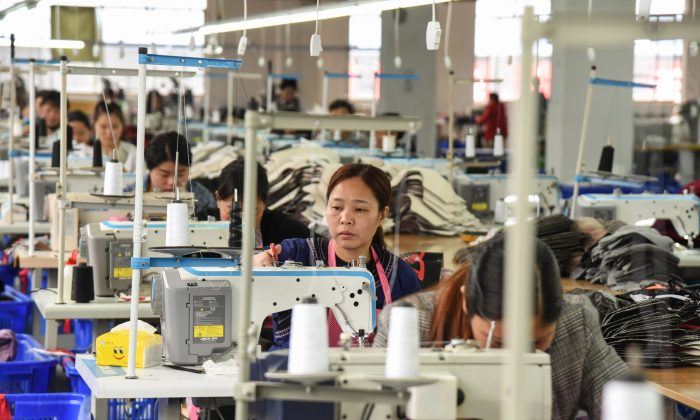 Data shows that in the first five months of this year, nearly 30 percent of enterprises in China’s textile industry operated at a loss, and the total profit of enterprises decreased by nearly 20 percent compared with the same period last year.

According to data released by China National Textile and Apparel Council this month, from January to May this year, nearly 27 percent of China’s textile enterprises above a designated size suffered losses, down 6 percent than the same period last year; the total profit of the enterprises was 73.4 billion yuan (about $11 billion), showing a year-on-year decrease of nearly 20 percent.

At the same time, the output of yarn and textiles of enterprises above a designated size decreased by 3.2 percent and 1.3 percent respectively year-on-year, and the output of clothing and chemical fiber was basically the same as that of the same period last year. The average number of workers employed in the industry was 5.54 million, a decrease of 2.3 percent over the same period of the previous year.

Losses in the dyeing industry are even more serious. The Bureau of Statistics of the Chinese Communist Party (CCP) released data admitting that in the first five months of 2022, among the 1,684 dyeing enterprises above the designated size in China, 35 percent (588) suffered losses, and the loss increased by 15 percent compared with the same period last year; the total loss reached 1.535 billion yuan (about $2.3 billion), a surge of 42 percent over the same period last year.

Since the beginning of this year, the prices of natural gas, electricity, cotton yarn, and the cost of logistics and transportation have all risen significantly, compressing corporate profit margins. In addition, under the impact of the Omicron epidemic, the CCP authorities have implemented extreme prevention and control policies, resulting in weak consumer demand in China’s domestic market, and insufficient terminal demand has led to a shortage of orders for upstream companies.

The survey showed that the CCP’s zero-COVID policy and epidemic prevention and control measures have caused major damage to the operations of China’s garment and textile enterprises.

Since late March this year, when the Omicron variant surged, Shanghai and its surrounding areas, Suzhou, Kunshan in Jiangsu Province, Hangzhou in Zhejiang Province, and other places, successively implemented large-scale blockade measures. These are the key production areas of China’s textile and garment industry.

In mid-April, the Jiangsu Textile and Garment Industry Association conducted an investigation into the impact of the lockdown measures on the province’s 199 large-scale textile and garment enterprises.

Looking at the survey results, nearly 85 percent of enterprises reported a decrease in operating income and tight liquidity. They said the Lockdown measures have hindered trucks entering and leaving ports and cross-regional transportation, while raw materials and equipment cannot be transported in and products cannot be transported out; at the same time, freight costs have increased by 20 to 30 percent; and labor costs have also increased due to precautionary measures and higher social security benefits.

One quarter of the companies surveyed reported that their production had dropped by more than 50 percent due to the impact of the lockdown measures. In addition, 51 percent of companies reported a drop of 20 to 50 percent in production. Only 1 percent said they have not been affected.

When asked about the main challenges they are currently facing, 73 percent of the surveyed companies mentioned the increase in production costs, 67 percent mentioned the drop in orders, 65 percent said they could not produce and operate normally, and 41 percent said it was difficult to collect payments.

According to data released by the China Textile Federation Industrial Economics Research Institute, in the first quarter of this year, the new order index of China’s textile industry was 37.8, down 29 points from the fourth quarter of 2021.