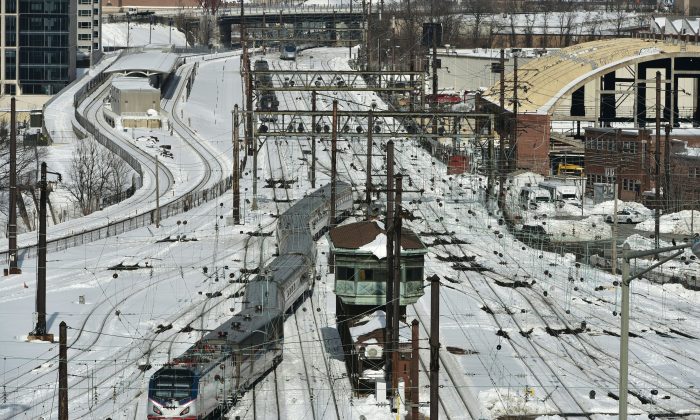 An Amtrak train is seen at Union Station on Jan. 25, 2016 in Washington. (Mandel Ngan/AFP/Getty Images)
US News

An Amtrak train carrying nearly 200 passengers was stranded in Oregon for more than a day and a half after hitting a tree that had fallen onto the tracks, according to officials.

The Amtrak Coast Starlight train that had 183 passengers on board stopped at Oakridge just before 6:20 p.m. on Feb. 24, according to an Amtrak spokeswoman, reported Oregon Live. The train was traveling from Seattle to Los Angeles.

Spokeswoman Olivia Irvin said heavy snow and debris had prevented them from moving and also prevented alternative forms of transportation.

As of the morning of Feb. 26, a representative for Union Pacific (UP), the company that owns the Oregon rail lines, said the train is now being pulled by a locomotive back toward Eugene. Oakridge is about 45 miles southeast of Eugene.

“The train had been inoperable due to weather conditions and downed trees. UP crews worked overnight to clear the tracks,” spokesman Tim McMahan told CNN.

Earlier today, Amtrak said the train would head back to Seattle rather than continue to Los Angeles. The update read: “Coast Starlight Train 11 which departed Seattle (SEA) on 2/24 is on the move back to Seattle (SEA). Due to weather conditions, additional delays are to be expected along the route.”

UPDATE: Coast Starlight Train 11 which departed Seattle (SEA) on 2/24 is on the move back to Seattle (SEA). Due to weather conditions, additional delays are to be expected along the route.

Passenger Rebekah Dodson, who has been sharing her experience on the train on social media, told Oregon Live that the train hit low-hanging branches, which damaged and disabled the train. She said crews tried to repair the train at around 1 a.m. on Monday, Feb. 25, but were unsuccessful.

Dodson, who is an author and professor at Klamath Community College, said that at 7 a.m. on Monday they were told another train would come and tow them to Eugene. But at 1 p.m. the train was still coming. Since then there was no official word from Amtrak on when they would be rescued, the professor said.

“It’s been difficult to keep people’s panic down and morale up because we have no idea when we’re getting off,” Dodson told the news website. “It’s just a mess and there’s nowhere we can go.”

Early on Tuesday morning, Dodson posted an update on Twitter that the train had its engine switched as well as a video of the train moving back to Eugene.

“Look at that. We are moving. It’s totally awesome. I’m super excited. You can see from here all the fallen trees. So we actually did have some major track issues,” she said.

Other passengers in her video described the experience as “overwhelming.”

“At this point, it’s like a new step and it’s not like solidly sitting there,” Dodson added.

In a statement, Amtrak Executive Vice President Scot Naparstek, who is also the chief operating officer, said the company regrets the extended delay of the train’s journey due to extreme weather issues during the trip.

“With more than a foot of heavy snow and numerous trees blocking the track, we made every decision in the best interest of the safety of our customers during the unfortunate sequence of events,” Naparstek said in the statement.

He also defended the company’s decision to keep passengers on the train during the ordeal, saying that it was the “safest place for … customers.”

“With local power outages and blocked roads, it was decided the safest place for our customers was to remain on the train where we were able to provide food, heat, electricity, and toilets,” he said.

According to the National Weather Service, the area received 10 to 14 inches of snow by Monday afternoon. Moreover, power outages were widespread in the area, reported Oregon Live. On Monday evening, 42,000 customers were without power from Corvallis to Roseburg, where 31,000 were without electricity, the local power company, according to Pacific Power.