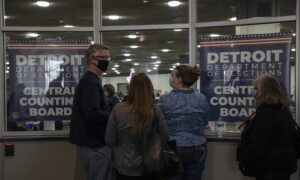 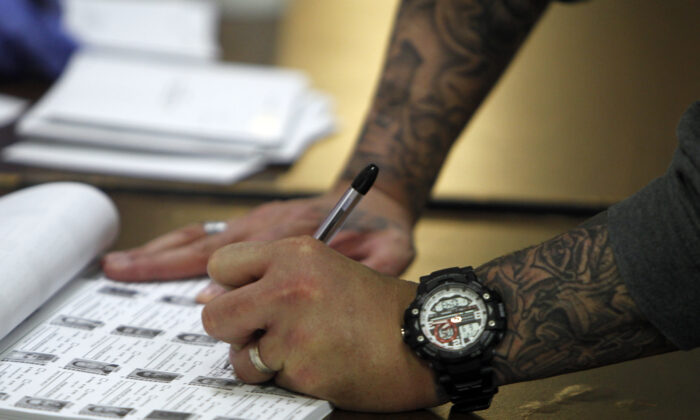 An inmate signs before casting his ballot during an early vote during the referendum for Puerto Rico political status at a prison in Bayamon on June 9, 2017. (Ricardo Arduengo/AFP via Getty Images)
Election Integrity

“First, they said they found four boxes of uncounted votes. Then it was 50, and last night 100,” elections observer Fermin Arraiza told The New York Times. “I get there this morning, and it’s 115 boxes. Now, I think it’s 190.”

The uncounted ballots were uncovered in a secured vault, according to the commission’s new president Francisco Rosado, who blamed the “disorganization” on what he said was an underfunded and understaffed administrative board in charge of counting a record number of early and absentee votes.

“We’ve identified, much to our regret, a disorganization in the handling of material in the vaults,” he told reporters at a press briefing. “Misplaced. Poorly organized. We have to admit that.”

More than 220,000 absentee and early votes were received in Puerto Rico this year. Gov. Wanda Vázquez in June approved new legislation that allowed for the softening of restrictions for absentee and early voting. It allowed any voter who requested an absentee ballot to receive one provided they could attest that they would have difficulty getting to a polling location.

“We agree that Puerto Ricans should exercise their right to vote, without putting their health or that of their families at risk,” Vázquez said at the time. “There is no reason why any Puerto Rican residing on the island and active in the Electoral Registry but who will not be in Puerto Rico on Election Day, should be deprived of his or her rights.”

The incident has drawn criticism and scorn from voters who now question the validity of the outcomes of certain races.

The uncounted ballots could change the results of a number of tight races that have already been preliminarily certified, elections officials have said. In Guánica, only nine votes stand between the candidates in the race for mayor, according to preliminary results, while in San Juan, the discovery of the ballots could force a recount.

The uncovering of the uncounted ballots comes after Puerto Rico’s August primaries were botched and required a second round of voting. The elections commission’s former president resigned a month later.

“The whole tragedy here is not so much how it turns out in the end, but it’s that I don’t think anyone in Puerto Rico, after a failed primary and this current process, can really say they trust the system,” William Ramirez, the executive director of the American Civil Liberties Union in Puerto Rico told the NY Times. “We had a large turnout of young people. They voted for the first time, and this was their experience.”

Rosado said that as many as 500 ballots were found in a single box. On Wednesday morning, he told WKAQ-580 AM radio that the boxes could have contained between 3,000 and 4,000 votes.

All newly uncovered ballots are expected to be counted by Thursday, according to Roberto Iván Aponte, electoral commissioner for Puerto Rico’s Independence Party. Final results are not expected to be certified until December, he said.

“Every vote will be counted,” Rosado said. “I have to tell the people of Puerto Rico to trust the transparency of the process.”

The commission typically unveils final vote counts on the night of the election.