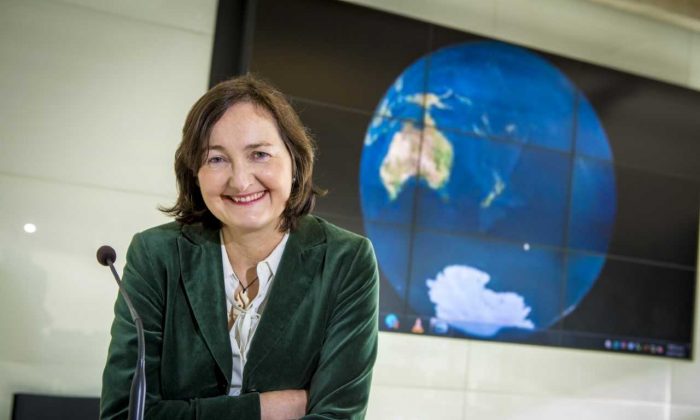 Professor Anne-Marie Brady, acknowledged internationally as an expert on Chinese affairs, recently presented a paper to a conference in the United States titled Magic Weapons. (University of Canterbury)
By Mimi Nguyen Ly

China-watchers from around the world have signed a petition to demand greater protection for a New Zealand academic Anne-Marie Brady who said she was harassed and home and office were burglarized simply for doing her job.

At least 169 supporters are “alarmed and appalled” to hear about the alleged harassment of Brady, who believes the acts could be a form of retaliation for her critical research on China’s politics. In an open letter, signatories called on New Zealand authorities to protect Brady, noting her requests for police protection has been ignored for more than four months.

“We urge the New Zealand authorities to grant Professor Brady the necessary protection to allow her to continue her research, sending a clear signal to fellow researchers that independent inquiry can be protected in democratic societies and conducted without fear of retribution,” the letter said.

Brady is a professor who specializes in Chinese domestic and foreign politics at the University of Canterbury in Christchurch. Her name rose to prominence after she published a research paper in September 2017 called Magic Weapons, (pdf) which details how the Chinese Communist Party (CCP) plans to achieve worldwide influence. The paper used New Zealand as a case study.

The report was accompanied by a briefing detailing a series of policy recommendations (pdf) as to how the New Zealand government can respond to the CCP’s political interference. While it only pertained to New Zealand, the policy briefing nonetheless attracted global interest.

“China’s covert, corrupting, and coercive political influence activities in New Zealand are now at a critical level,” according to the policy briefing, published in November 2017.

“She’s been a towering figure in contemporary Chinese studies, and her research has been groundbreaking,” Hala, who runs the Sinopsis project, which tracks China’s activity in the Czech Republic, told the New Zealand Herald. “If we don’t raise our voices in support of Anne-Marie, then any one of us could be next.”

Brady responded to the open letter with immense gratitude.

“I am honoured and humbled to have the support of so many prominent voices both internationally and in NZ, speaking up against the campaign of intimidation and harassment I have experienced since my Magic Weapons paper went public,” she said in a Twitter post.

“United we stand, divided we fall,” she added in another Twitter post. “The intimidation against me is aimed to scare my peers into silence. So glad to see they will not be cowed, and are standing up to be counted now.”

Brady told the New York Times in September that the New Zealand government’s lack of comment or public action was “starting to look like procrastination.”

On Feb. 14, Brady ‘s house was broken into. According to reports, burglars bypassed other valuables and, instead, targeted three laptops and two phones. Brady said she had received a letter a week before the break-in that said she would be attacked.

“It was a psychological operation, it was intended to intimidate,” she told NZ Herald in September.

Interpol, the New Zealand Security Intelligence Service (SIS) and the police’s National Security Investigation Team are investigating the case, according to reports. The investigation, which has stretched over more than nine months, has yet to conclude at the time of publication.

In September, Brady said she was pleased with the police investigation of her case.

“They looked seriously into all possibilities—exhaustively,” Brady told the NZ Herald. “This must surely be one of New Zealand’s longest and best-resourced burglary inquiries.”

While the break-in prompted investigations, Brady said she had previous experiences of intimidation, which included a break-in at her campus office in December 2017, soon after the publication of Magic Weapons.

More recently, on Nov. 15, Brady’s car was found to have been deliberately sabotaged. The mechanic who regularly services her car found that air had been let out of the two front tires, with both tires missing valve caps. The unusual defects would make steering and breaking more difficult, thereby increasing the risk of an accident.

“I don’t know who has done it, but whoever has done it has been able to get into my garage and access the car, so essentially it is another break-in,” Brady told the Guardian in November. “About four months ago, we asked for more protection from the New Zealand security intelligence service … we haven’t had a reply.”

Brady said her car is regularly used by her family.

“I’m concerned about the safety of myself, my lovely husband and our three teenage children,” she told the NZ Herald. “I’m also really concerned about the escalation of activities aimed at intimidating me and stopping my academic research. It appears whoever is doing this believes there are no consequences for doing it in New Zealand.”

A police spokesperson told the NZ Herald on Dec. 5 that Brady’s car had been inspected and “the police investigation is ongoing.”

The open letter is the latest in a series of coordinated efforts to support Brady’s case.

On Nov. 26, in a letter organized by Amnesty International’s New Zealand office, 29 intellectuals and human-rights advocates urged New Zealand Prime Minister Jacinda Ardern to make a clear statement in defense of academic freedom in New Zealand. Ardern issued a statement on the same day, according to the NZ Herald:

“Quite frankly, if I received a direct report that said there was an issue there that could be directly attributable to China or at China’s direction, we would act on that, but I have not received such information.”

“I absolutely defend the right of academics to utilise their academic freedom and, of course, the rights that are granted to them through our legislation. I absolutely support that and defend that.

“They should continue to be able to do their work, and with freedom from repercussion from this government or any other government.”

On Nov. 28, 35 of Brady’s colleagues at the University of Canterbury signed a letter calling on the NZ Government “to be transparent in any outcomes of the investigation regarding the case of Professor Brady.”