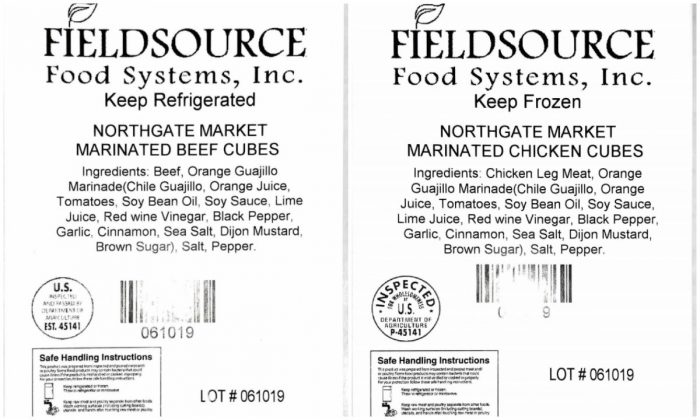 A californian company announced a recall of uncooked, marinated, diced beef and chicken cubes that were produced from June 9 through July 10, 2019.(USDA)
US News

Nearly 13,000 Pounds of Beef and Chicken Products Recalled Due to Undeclared Allergens

Nearly 13,000 pounds of diced beef and chicken products have been recalled due to misbranding and undeclared allergens, according to the U.S. Department of Agriculture’s (USDA) Food Safety and Inspection Service (FSIS).

The Californian company, Fieldsource Food Systems, is recalling marinated beef and chicken products produced from June 9 through July 10, 2019, which were shipped to grocery stores in California and are used behind deli counters, according to a statement on July 14. The company says the recalled products contain a known allergen, wheat, which was not declared on the label.

The following products are subject to recall:

USDA said in their statement that the product is not sold raw to consumers. They said the issue was discovered by FSIS during a routine label verification and have not confirmed reports of adverse reactions due to consuming the products.

The federal agency urges delis to not use the recalled products and should either throw away or return them to their place of purchase.

This comes after more than 13,800 pounds of raw pork and beef products were recalled from five states after being produced without federal inspection and outside inspection hours in April this year.

FSIS, the public health agency in the USDA, inspects all raw meat and poultry sold between states as well as imported foreign products. The federal agency even continues to monitor meat and poultry products after they leave federally inspected plants.

Meat that has passed its federal inspection for wholesomeness is stamped with a round purple mark, the dye of which is a food-grade vegetable dye and not harmful. Meat that is packaged in an inspected facility will have an inspection mark that identifies the plant on the label.

After inspection, producers and processors can request that their products be graded for quality by a licensed federal grader. USDA grades are based on nationally uniform federal standards of quality.