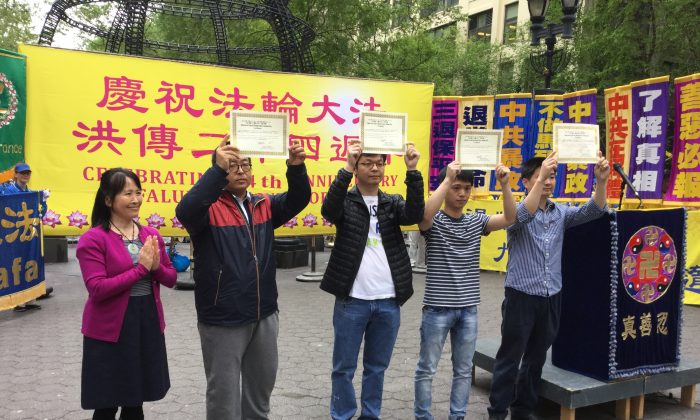 Jiang Yu (2nd L) speaks at the podium to announce his withdrawal from the Chinese Communist Party at Dag Hammarskjold Park on May 13. (Frank Fang/Epoch Times)
China

NEW YORK—Nearly 10,000 people from 53 countries gathered near the United Nations at Dag Hammarskjold Park on May 13, in a rally supporting Tuidang, a large grassroots movement in which Chinese people renounce their affiliation or support with the Chinese Communist Party.

“China, without communism, is good for the stability of the Chinese society and the peace of the world,” said Yi Rong, organizer of the rally and president of the Tuidang Center, a non-profit organization that solicits and catalogues the renunciation statements. “This rally is to support those who have cut ties with the Chinese regime.”

In addition to Yi Rong, the rally featured speeches by Alan Adler, chair of Friends of Falun Gong, and Manyan Ng of the German International Human Rights Association. A Taiwanese human rights lawyer and the heads of the Falun Dafa Associations in both Taiwan and Hong Kong also spoke. Falun Dafa, most commonly known as Falun Gong, is a traditional Chinese practice of meditation; the Associations of the practice in various countries are voluntary groups that coordinate the public activities of practitioners.

The movement to quit, or renounce, the Chinese Communist Party, called ‘Tuidang’ in Chinese, began shortly after the Chinese-language Epoch Times published the editorial series “Nine Commentaries on the Communist Party.” The series aimed to shed light on the use of violence and propaganda as key tools of Party rule since the founding of the regime.

The Tuidang movement, instead of calling for revolution or protests, “is about persuading Chinese people, one at a time, to understand that what they have experienced is indoctrination, and that the path to freedom for them is to quit the Party,” said David Tompkins, the spokesman for the Tuidang Center.

The organization holds a rally annually in May, coinciding with the celebration of Falun Dafa Day on May 13. Tompkins believed the number of Chinese people who have renounced the Party, currently standing at 237 million, will reach 240 million within a couple of months. The daily number of people quitting is 115,000, he said.

The numbers are based on the figure of renunciation statements registered at tuidang.dajiyuan.com (dajiyuan is the Chinese version of this newspaper) and is publicly verifiable. Tompkins says that volunteers at the Tuidang Center vet the statements received for their veracity.

One of the participants who took place in the rally was Pan Kaixiang, former assistant psychology professor from China’s Zhejiang University, who came to United States a year ago, after quitting the Party in 2005. He was thrown in jail because he was a practitioner of Falun Gong, a spiritual practice that has been the target of persecution by the Chinese regime since July 1999.

Pan decided to come to support the rally because he believed the Tuidang movement was a sign of “spiritual awakening of the Chinese people, as well as moral awakening.” Pan said that his greatest trauma while in prison was how the regime tried to “change his free-will and soul” with lies, threats, and brainwashing.

A highlight of the rally was when four men and two women stepped to the podium and announced their withdrawals from the Chinese Communist Party.

“I believe the Chinese Communist Party not only pollutes the environment, but it’s behind the greatest pollution of all—the pollution of people’s spiritual environment,” said Jiang Yu from Liaoning Province. “Falun Dafa, on the other hand, precisely solves this spiritual pollution.”

The practice teaches slow-moving meditative exercises as well as the principles of truthfulness, compassion and tolerance.

In an interview with New York-based New Tang Dynasty Television (NTD), Jiang said that he often used Freegate to access the websites of Epoch Times and NTD, both of which are censored in China. Freegate is an anti-censorship software that allows users to circumvent China’s Great Firewall.