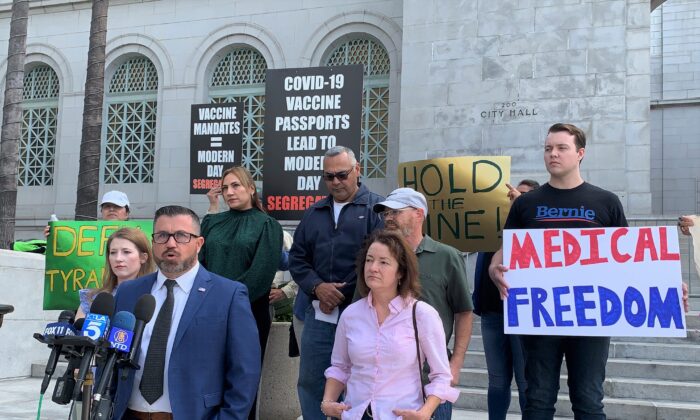 RollCall4Freedom, LLC. (RC4F), a group composed of 98 Los Angeles police officers and city employees, filed a lawsuit on March 15 in the district court for the Central District of California, arguing that the city’s vaccine mandate violates the U.S. Constitution, the group said in a press conference held in front of the City Hall on March 17.

The attorneys of the Law Offices of Pelayes & Yu, on behalf of their clients RC4F, challenged the religious exemption and testing protocols within Ordinance No. 187134 that requires all Los Angeles city employees to be vaccinated against COVID-19.

On Aug. 8, 2021, the city of Los Angeles approved a mandatory COVID-19 vaccination ordinance that requires all current and future city employees to be fully vaccinated and report their vaccination status. Exceptions are made for medical or religious exemptions, which must be submitted by Sept. 7, 2021.

Under current law, the city of Los Angeles is required to provide accommodations for employees with disabilities or religious beliefs, and to refrain from harassing or retaliating against such employees.

Angelica Anselm, a co-founder of RC4F, said the city’s current regulations also mandate weekly testing for those who are already exempted from getting the COVID vaccine or “in the process of approval.”

“Currently, the religious vaccine exemption forms required by the city are intrusive and discriminatory and are being reviewed by low-level bureaucrats who have no business determining the strength of these employees’ [requests],” she said.

These employees believe they have a right to “opt out of the long term side of a trial,” she added. “The goal with this complaint is to send the city back to the bargaining table to evaluate, evaluate their vaccination exemption. Establish an opt-out option for those who wish to not participate in experimental vaccine trials.”

Some police officers risk being terminated for refusing to participate in the city’s mandatory vaccination program for employees.

“I am one of just a handful of officers that are currently going through the termination process,” said Michael McMahon, a 14-year sworn-in officer and one of the founders of RC4F.

“Police officers were naturally investigators. So in doing my own research, determining the evidence that I saw in hand, I made my own decision that the vaccine was not going to be for me … it was my personal choice as an individual and as Americans we’re afforded rights by God,” he said.

The city has initiated the process of terminating his employment, bringing financial troubles to his family. He also mentioned that the city government requires all unvaccinated employees to take eight tests every month, costing $65 each time, at their own expense.

“We have to recognize that most of the population of the United States has natural immunity,” he stressed. “But the vaccinated who we all know can still carry and can still transmit the virus itself.”

Another 18-year veteran public servant in the city government said: “I have gone to work daily now for approximately 6 months with the mental pain and stress of not knowing if my job and livelihood will be taken away from me because of LA city’s unreasonable mandate for vaccination.”

The city government did not respond to The Epoch Times’ request to comment by press time.