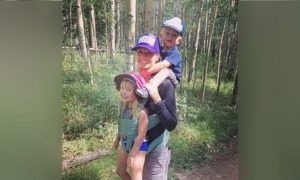 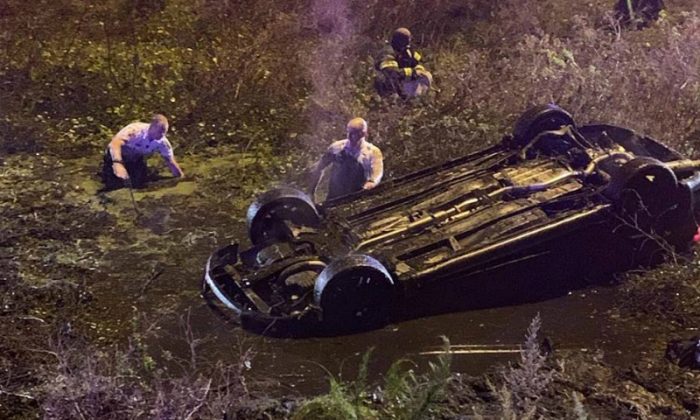 Deputies wade out to an overturned car near the I-4 highway in Florida, on Jan. 1, 2019. (Hillsborough County Sheriff)
Crime and Incidents

As they drove through dense fog, sheriffs knew somewhere nearby a woman was trapped, water rising from her chest to her neck, desperation breaking in her voice as she spoke to 911 dispatchers who were still scrambling to figure out in which ravine her overturned car was slowly sinking.

Eventually, from one of the 13 patrol vehicles,  the upturned back end of her car could be seen protruding from the water and filth of a ditch. One of the deputies waded out to her, keeping her calm as she breathed from a shrinking pocket of air until the dive team finally pulled her from the thick mud.

Unharmed, the woman was back in her Florida home just hours after she had first plunged into the ravine at 3:50 a.m. on New Years Day.

The Hillsborough County Sheriff in Florida said that the woman owed her life not just to the deputies who leapt into the mud, but also to the dispatcher who kept her calm throughout the call.

When the woman called 911 and told them she was upside down in a ditch somewhere off the I-4 highway, the communications centre could hear the desperation in her voice, Sheriff Chad Chronister told reporters.

“But for them we would not have been able to calm her down and figured out where she was, as the water rose from her chest to her neck.”

She was able to gradually recall details of her surroundings to help guide dispatchers, such as remembering seeing the wheels of the Florida State Fairground.

Chronister described the ditch as being filled with “muck” that the deputies had to break through to reach the car.

The patrol cars were hampered by “dense, dense fog,” he said. “Our lights are bouncing back at us from the fog as we are trying to find this woman who is literally drowning as we speak. Finally, one deputy could see the back end of a car sticking out of the mud.”

‘No Way She Could Have Got Out on Her Own’

One of the rescue divers said they were able to pry open the doors and get her out of the vehicle.

“It was thick, muddy, disgusting water that came up to your chest and it was very difficult to move,” the unnamed diver told reporters.

“Encased in mud, there’s no way she would have been able to get out of the vehicle on her own,” he added. “In other cases, where you are in a submerged vehicle, you can get out, but in her case, absolutely not.”

The woman was trapped for at least 15-20 minutes, according to Chronister. “She’s extremely fortunate,” he said. “Usually at New Years we have stories that are extremely tragic, with bad accidents. Today was a great scenario where everything just came together the right way.”

Chronister said he did not know the cause of the accident, which is now becing investigated by the Florida Highway Patrol.

“If you are in an accident or in a drowning scenario, the number one thing you can do is to remain calm,” he said. “As she calmed down she was able to give us more and more information.” Those little pieces were clues that help us find her and eventually save her own life.”