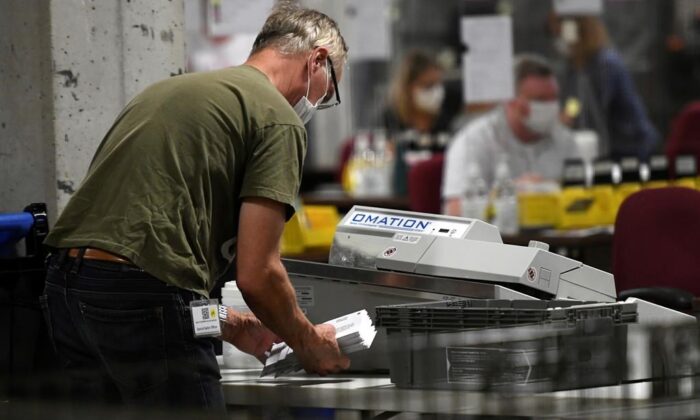 A worker uses a envelope cutting machine as they open special ballots from national, international, Canadian Forces and incarcerated electors at Elections Canada's distribution centre in Ottawa on election night of the 44th Canadian general election, on Sept. 20, 2021. (The Canadian Press/Justin Tang)
Canada

NDP to Request Recount in Toronto’s Davenport Riding, Where Liberals Won by 76 Votes

OTTAWA—The NDP is to ask a judge for a recount in a Toronto seat where it lost to the Liberals by 76 votes.

The New Democrats say they will go before a judge on Tuesday to ask for a recount in Davenport, a Toronto riding where the NDP narrowly lost to the Liberals.

The result was one of the closest in the federal election. Liberal Julie Dzerowicz defeated NDP candidate Alejandra Bravo with 42.1 percent of votes cast, compared to Bravo’s 42 percent.

Dzerowicz has represented Davenport for the Liberals since 2015.

The result was so close this time that it almost triggered an automatic recount.

The NDP said that when votes were tallied during a “quick recount” after polls closed, 90 extra votes were “found” for the NDP, according to Melanie Richer, NDP Leader Jagmeet Singh’s communications director.

“We asked for a recount in Davenport. Tomorrow it will go before a judge,” she said.

Parties can go to court to request a judicial recount after votes have been checked and validated.

An automatic judicial recount is triggered if there is a tie between the two leading candidates or if the difference in votes is fewer than one one-thousandth of the total votes cast.

A recount is already happening in the Quebec riding of Chateauguay-Lacolle where the Bloc Québécois candidate defeated his Liberal rival by 286 votes.

The Liberals asked for a recount after a “potential anomaly” was discovered with a ballot box after the votes were validated. Typos in recording votes in the riding also had to be corrected by the returning officer.