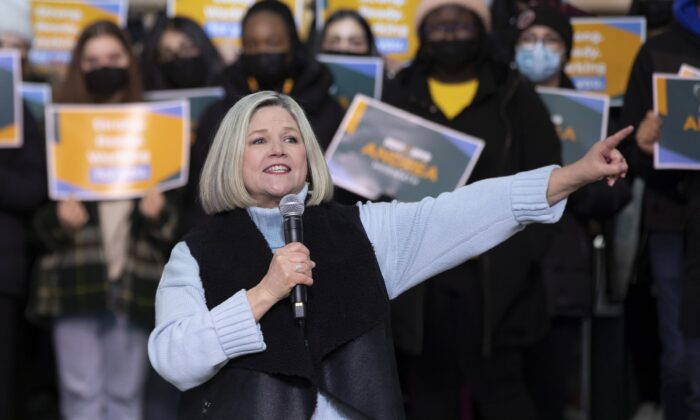 Some readers may object that the Ontario NDP is most unlikely to win the upcoming provincial election or any subsequent one. Others may ask “What’s the Ontario NDP?” But the answer is that it’s one of the most successful unsuccessful political parties in the world, primary because its vision of government spending as invariably bringing brilliant rates of return is pervasive in Canadian political culture despite the anguished cries of experience and economic theory alike.

Canadians do not generally elect our official socialists to office. Partly because they chose their garish colours and increasingly creaky name “New Democratic Party” back in the 1960s and neither has aged well. But mostly because the NDP has a disturbing habit of articulating the beliefs of the political classes with singular clarity. So after rubbishing them on the campaign trail, the Old Autocratic Parties, not just the Liberals but to an astounding degree the Conservatives, then implement their ideas. Hence Doug Ford and his populist Tory colleagues here in Ontario bringing mandatory critical race theory to schools via an NDP private member’s Bill 67.

Occasionally the NDP wins at a provincial level, usually bringing immediate, lasting buyer’s remorse. And they have never won federally, although Justin Trudeau has been called our first NDP prime minister, including by disgruntled members of his own party. But if you compare various dusty orange and brown NDP manifestos with shiny government policy today, you see again that those who stand for something, even something bad, often get the last laugh on those who only stand for office.

Including, I fear, the utterly forgettable leader of the Ontario NDP saying, “Mental health care is health care… We can take action to fix it – so in Ontario, you’ll get mental health care with your OHIP card, not your credit card.” And on the cheap, for a mere $1.15 billion.

If you believe that estimate you need help, given how reliably public programs including health care overcharge and underdeliver. But you’re not alone, because the critical component of the whole plan is that, the National Post reports, “In addition to benefits to individuals’ mental health, the NDP says its plan would save billions of dollars because community care would lessen the need for critical care, and not as much productivity would be lost in the workforce. As well, the party said businesses offering health insurance would also see savings.” And people believe it across the spectrum.

Red tie, blue tie, or orange bandana makes no difference. They think government reliably does things cheaper and better than private firms. Which is why advocates for whatever program are wont to say at every turn, “We can’t afford not to do it.” Go ahead. Google it. And it’s no mere verbal tick. How often does any party, even if nominally Conservative, even propose abolishing a government program because it’s doing more harm than good, let alone follow through?

Over in Quebec, where they do things differently only they don’t, André Pratte wrote in a National Post commentary that the nominally fiscally responsible Coalition Avenir Québec aren’t just blowing the lid off spending at the first opportunity, or would be if the lid had ever been on. Including sending everyone making under $100,000 a cheque for $500 right before an election and calling a $6.5 billion deficit a balanced budget “with absolutely no austerity.” They also plan to dump $8.9 billion into socialized medicine over five years to “restore the health-care system.” For the umpteenth time in 40 years, as they acknowledge, while insisting that this time will be different.

Why? Health spending has risen there by $13 billion in the past 10 years, and at 35 percent of program spending, while lower than most provinces including Ontario’s 43 percent, it’s slowly strangling virtually everything else including infrastructure, while waiting lists keep growing. But they honestly believe à la NDP that a dollar spent on public health care brings more than a dollar in benefits, so the worse it gets the more they can’t afford not to spend.

They’re no clearer on how exactly it works than Horwath. But look at all the free money: gains to individuals, savings in critical care, increased workforce productivity, cash pouring into the treasury and right back out again, and everybody wins. Wheeeeee! And whatever dismal outcome actually results, it’s only because we aren’t spending enough.

On the plus side, once the blob swallows counselling too, you’ll be able to line up for free help for Economic Derangement Syndrome. On the minus side, it’ll be shock therapy when they wheel in the bill.