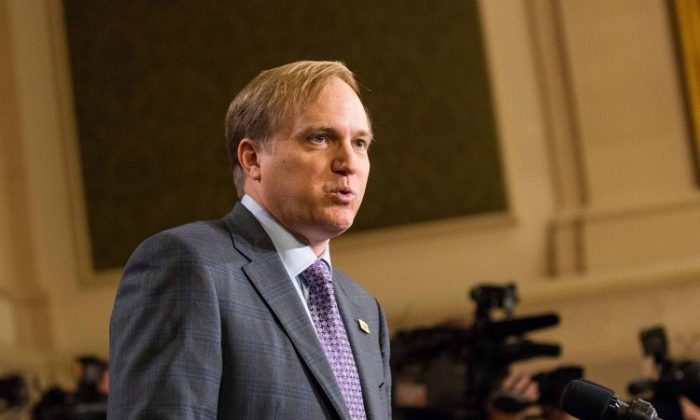 NDP natural resources critic Peter Julian, seen here Sept. 19, 2012, told reporters Thursday that the NDP had decided to oppose Nexen’s takeover by CNOOC, citing a lack of transparency in the government’s review of the deal and ongoing concerns about the consequences. (Matthew Little/The Epoch Times)
US

After weeks of grilling the government over the possible takeover of Calgary-based oil company Nexen by Chinese state-owned CNOOC, the NDP has come down against the deal.

Natural resources critic Peter Julian made the announcement Thursday morning alongside industry critic Hélène Leblanc, citing a lack of transparency as a key factor in the decision.

“The Conservatives failed to act in good faith and inform the public of the consequences of this takeover. We’re talking about a company that plays a key role in a critical sector of our economy,” said Natural Resources critic Peter Julian in a statement released shortly afterwards.

CNOOC’s efforts to buy out Nexen have attracted continued scrutiny over issues including national sovereignty and espionage. The New Democrats have focused in on a lack of detail over how the government will decide whether or not to approve the takeover under the Investment Canada Act.

The NDP is also concerned about how the CNOOC’s past environmental and human rights transgressions will be addressed by the government in reviewing the takeover.

“Foreign investments are crucial for reinforcing our economy, but we must ensure that these investments are not made at the cost of quality jobs and the sustainable development of our resources,” said Julian.