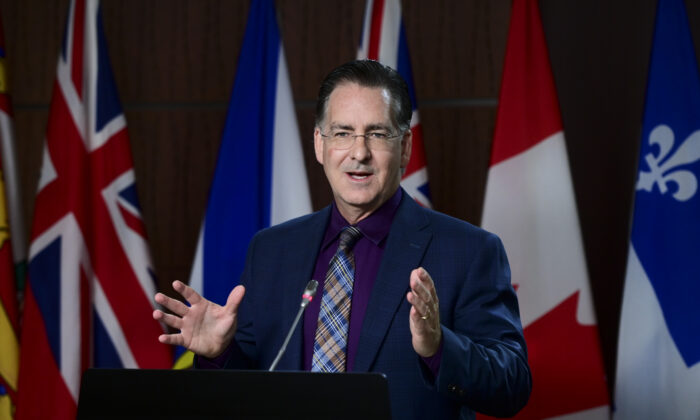 NDP member of Parliament Brian Masse speaks at a press conference on Parliament Hill in Ottawa on June 1, 2021. (The Canadian Press/Sean Kilpatrick)
Canada

New Democrat MP Brian Masse is calling on parliamentarians to “speak up” against the continued use of ArriveCan at Canadian borders, saying the app will “destroy” the country’s tourism sector.

Launched by the federal government in November 2020, the ArriveCan app was created as a COVID-19 screening measure that ensures arrivals are vaccinated, as well as facilitating contact tracing.

Masse, who represents the riding of Windsor West in Ontario, alleges that the app does not provide Canadians the protection it claims, but rather serves to “track” travellers.

“I always fight for safety 1st, #ArrivCan is not that. It’s being used as a back door to permanently track all border crossing,” he said in a July 24 Twitter post.

“MPs need to speak up now or it will destroy our tourism industry, frustrate & create longer line ups when the technology fails.”

Masse’s tweet was in response to a July 22 report by CBC News— for which he was interviewed—that said up to 40 percent of people arriving at the Windsor border did not have ArriveCan completed because they forgot to do so, didn’t know it was required, or filled out the app incorrectly.

“We’re so short-staffed and spending so much time dealing with this app that we really don’t have time to do our actual jobs anymore,” said Weber in an interview reported by The Canadian Press on July 25.

The Trudeau government announced in June that the app will be mandatory until at least Sept. 30 but Public Safety Minister Marco Mendicino has indicated that ArriveCan will outlast the pandemic as part of a strategy that aims to shrink border bottlenecks.

In mid-June, a group of mayors from Canadian border communities called on the Liberal government to scrap both the app and vaccination requirements at Canada-U.S. land borders.

“[If] you upset your customers, they go back and tell all their friends. Many people are bypassing Canada. That’s going to have long-lasting effects on this country. It’s a more than $100 billion industry in this country—we need to do everything we can to open things up,” Diodati said.