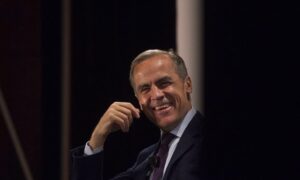 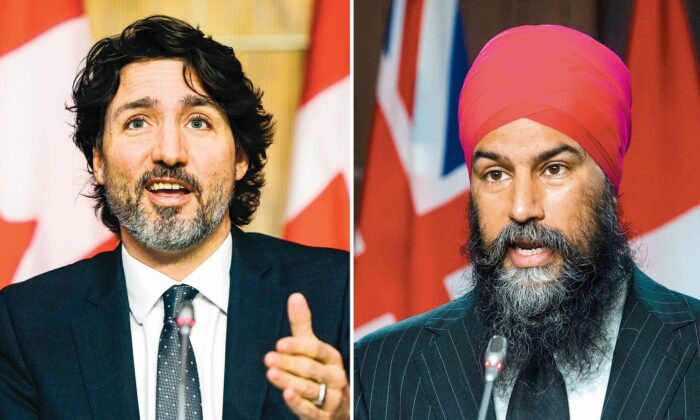 Liberal and NDP party members endorsed a plethora of left-leaning policies at their conventions this past weekend following Easter, but it is doubtful many will see their way into an election platform.

At the Liberals’ national convention held online April 8–10, party delegates embraced a national pharmacare program as their top priority. Prime Minister Justin Trudeau supports the premise, just as the party has since 1997. But in February he voted against an NDP private member’s bill for national pharmacare, saying the bill disregarded provincial jurisdiction.

Trudeau is also unlikely to advance a universal basic income (UBI), even as Liberal delegates passed two resolutions in favour of a UBI and ranked them second and fifth in importance. Last December, Trudeau said of the UBI, “It’s not something that we see a path to moving forward with right now.”

Parliamentary Budget Officer Yves Giroux recently estimated that a UBI that costs $85 billion in 2021–22, rising to $93 billion in 2025–26, would give single people $17,000 a year and cut poverty rates by almost half in one year. However, a collaborative study released in January by academics at three Canadian universities concluded that improved disability assistance, dental care programs, and more money to help the working poor pay rent would be a better approach than UBI.

In all, Liberal delegates passed 26 resolutions to become official party policy. Nine expanded the welfare state, seven addressed the green economy or the environment, three were for infrastructure, two dealt with minority issues, and five related to other issues.

The NDP convention, which ran April 9–11, matched the Liberals’ by endorsing a transition to green energy and the recommendations of the National Inquiry into Missing and Murdered Indigenous Women and Girls.

On some issues, the NDP went further. Both parties resolved to bring high-speed internet to remote areas, but the NDP wants a federal Crown corporation to be created to carry out the task. The Liberals want to enforce national standards on long-term care homes, while NDP delegates want the same but also propose an end to for-profit care homes, which would be pulled into the public health system.

NDP delegates narrowed 500 policy proposals to a shortlist of 140. However, time limitations allowed just 13 to be discussed, partly because technical difficulties and points of order hindered discussion. Some radical proposals were shelved, such as phasing out the Canadian military, nationalizing the auto industry, or “abolishing billionaires” by imposing a 100 percent tax on all gross wealth above $1 billion.

Still, delegates voted overwhelmingly in favour of an 80 percent tax rate on income over $1 million, and an annual 1 percent tax on personal wealth above $20 million. This departed from the party’s stance under previous leader Tom Mulcair, who called any tax above 50 percent “confiscatory.” In 2012, France adopted a 75 percent tax on annual incomes above 1 million euros, only to abandon it two years later as it failed to produce much revenue.

Over 80 percent of NDP delegates supported a resolution calling for “ending all trade and economic cooperation with illegal settlements in Israel-Palestine” and “suspending the bilateral trade of all arms and related materials with the State of Israel until Palestinian rights are upheld.”

NDP Leader Jagmeet Singh said at a press conference on April 11 that “I strongly believe in Israel’s right to exist” but that the resolution was “based on a lot of evidence that we’ve heard from international human rights groups that say that we need to apply pressure to achieve a solution” to the Palestine-Israel conflict.

“That’s something I support. To achieve a peaceful resolution we need to, as an international community, use our tools to achieve that,” he said, though he refused to say whether he would include the policy as part of his election platform.

Singh said the suggestion to abolish billionaires was a “manifestation of people’s frustration” with the “absurd inequality in society right now.” However, he said he opposed a phase-out of the military.

“The function of the so-called policy conventions wasn’t about policy at all. In the case of the Liberals, it was to showcase Trudeau, Mark Carney. And the important thing was what was going on in their workshops which weren’t policy-oriented. They were overwhelmingly oriented toward fighting an election,” Wiseman told The Epoch Times.

Some NDP resolutions included measures to combat racism, specific strategies to stop hate crimes against Asians, and an expression of solidarity with farmers in India.

“[Identify politics] hasn’t completely taken over the NDP, but it’s there … and Singh plays to it as well. But identity politics has taken over the Liberals,” Wiseman said.

“The NDP isn’t going to form the government, so those are all pie-in-the-sky things in a way. So much more relevant is what the Liberals propose. And I thought the most interesting thing was that they voted against increasing the capital gains tax.”

The Liberal convention boasted more than 10,000 participants, while the NDP claimed just around 2,000 at theirs. Royce Koop, political studies professor at the University of Manitoba, wishes there were more.

“There’s people in these parties, there are Canadians that are energetic and focused on these questions, and it’s a shame there’s not more of them. And then probably a big reason for that is that these policy resolutions don’t have any real-world consequences once the convention is over.”

The leader and campaign team have a larger say, Koop said in an interview.

“They will choose the policies that they want to run on on the basis of their polling and their focus groups and their segmentation. And if it happens to coincide with their resolutions in the past, then that’s nice.”

Koop said he “can’t imagine” a UBI anytime soon, and noted “an interesting, very familiar dynamic of Liberal Party members of pushing ideas from the left, and they receive a cold shoulder from the leadership of the party. … The Liberals campaign on the left and govern on the right.”

Allen Mills, a retired University of Winnipeg political scientist, said online conventions result in even less change than conventional ones.

“They’re hard to generate any great standing insofar as they’re all being done virtually, and that doesn’t seem quite right. But I think you can see the parties positioning themselves in light of an upcoming election,” he said.

Mills says the Liberals have been centre-left since 1965, and “if they get re-elected, will not follow up on some of these policies. I think that’s a solid pattern.”

“Insofar as they differ in terms of their relative radicalism, it is because the NDP wants to not be outflanked by the Liberals, and the Liberals, I suppose, are quite happy to be outflanked a little on the left by the NDP. Because of course that reinforces their image as a sort of broad party which is centre-left rather than just to the left.”