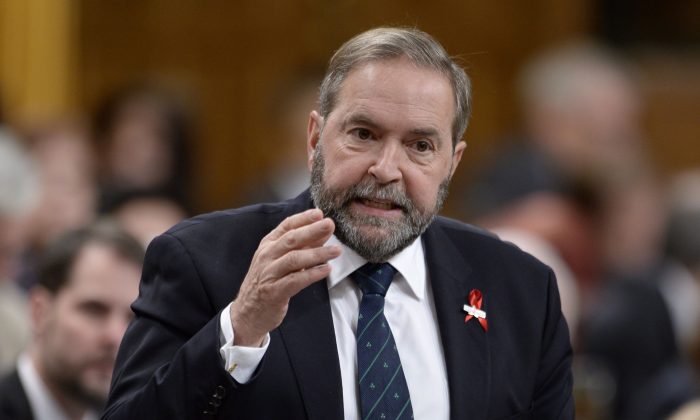 NDP Leader Tom Mulcair speaks during Question Period in the House of Commons Nov. 27, 2014. Mulcair says an NDP government would revive the long-gun registry, minus the flaws that made the original so controversial. (The Canadian Press/Adrian Wyld)
Canada

NDP Government Would Revive Gun Registry, Without the Flaws: Mulcair

OTTAWA—A New Democrat government would ensure police are able to track every firearm in Canada, but would also seek to avoid the pitfalls that made the now-defunct long-gun registry so controversial, Tom Mulcair said Wednesday.

The NDP leader disputed the Conservative government’s contention that gun registration is an unfair, onerous requirement for law-abiding gun owners.

“I have nothing against seeing honest farmers and duck hunters be able to have their weapons,” Mulcair said outside an NDP caucus meeting.

New Democrats “have confidence in the ability of farmers and duck hunters to fill out a form,” he added.

While farmers and hunters are entitled to own firearms, Mulcair suggested there must be strict limits.

“What kind of duck do you hunt with an assault weapon? A pterodactyl?”

There’s no reason a system of tracking firearms has to go “overboard,” as the Liberals did when they created the costly long-gun registry and imposed criminal penalties for failure to register, Mulcair insisted.

“I think that it is possible to provide the police with the tools to better protect the public and themselves by making sure they’re able to follow every gun, and it doesn’t have to be the registry as it was before,” he said.

“But it does have to be a form that allows the governments, federal and provincial, to keep track of those guns. That’s our bottom line.”

Nevertheless, an aide later took issue with the assumption that Mulcair was saying an NDP government would reinstate some form of gun registry. A registry is not necessarily the only way to track firearms and the party is currently exploring options, the aide argued.

The registry divided the country and political party caucuses, including the NDP, along urban-rural lines.

Liberal Leader Justin Trudeau reiterated Wednesday that he would not reinstate the gun registry, even in a modified form, because it’s simply too divisive.

There are other ways to reduce gun violence, he said, including through the classification of restricted and prohibited firearms and through the requirements imposed on the purchase of firearms.

“Canadians are united in their desire to see less violence with guns across this country,” Trudeau said. “We shouldn’t be divided on the ways to do that and that’s what I’m committed to doing.”

The opposition leaders gave their views on the gun registry just three days before the 25th anniversary of the massacre at Montreal’s Ecole Polytechnique, where gunman Marc Lepine killed 14 female students.