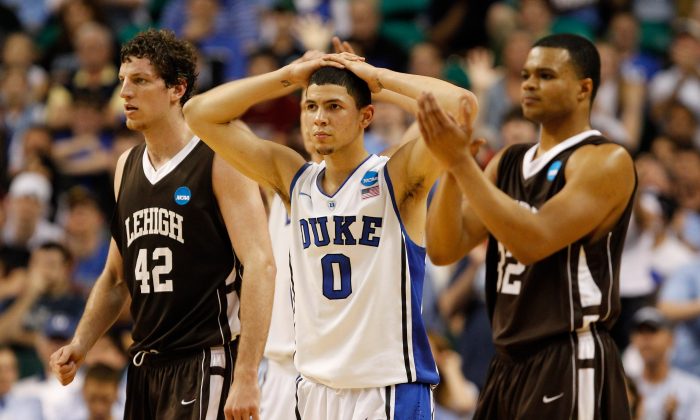 The NCAA’s March Madness is the time where anything can happen.

Generally speaking, the most exciting games of the tourney are in the early rounds where the lower-seeded smaller schools have a fighting chance to upset the heavy favorites. Here are the 10 biggest first round upsets since the tournament expanded to 64 teams in 1985:

10. 2012: 15) Norfolk State beat 2) Missouri 86–84—How’s this for debuts? Norfolk State, in their first ever NCAA tournament game, became just the fifth 15-seed to ever beat a 2-seed when they shocked a 30-win Missouri team in an absolute offensive slugfest.

The high-scoring affair featured six 20-point scorers, three on each side, while both teams hit better than 50 percent from the floor. Spartan center Kyle O’Quinn led all players with 26 points and 14 rebounds as the Tigers were badly out-rebounded 35–17.

Amazingly, Norfolk State pulled off this upset without a single bench player registering a point.

9. 1997: 15) Coppin State beat 2) South Carolina 78–65—Eddie Fogler’s Gamecocks had won 19 of 21 games and were heading into their first-round affair with the Eagles as 30-point favorites. Coppin State’s best player, Terquin Mott, was limited by a sprained ankle.

Despite the bum ankle, Mott contributed 11 points and 11 rebounds as the Eagles took a 55–54 lead with just over six minutes left and never looked back. The win was the third ever by a 15-seed.

Leading by as many as 19 points in the second half, Florida Gulf Coast, playing in their first ever big dance, withstood a late 21–10 Georgetown run that cut the lead to just 4 with 54 seconds remaining.

The Hoyas wouldn’t score again though.

Actually Georgetown had trouble scoring most of the game, hitting just 37.5 percent from the floor and connecting on just 7 of 27 3-pointers.

7. 2001: 15) Hampton beat 2) Iowa State 58–57—Led by future NBA point guard Jamaal Tinsley, the Cyclones had won back-to-back Big 12 Conference titles and were coming off a regional finals appearance the previous season. But they quickly found themselves in a dogfight with a team that was making its first ever appearance in the NCAA tournament.

Iowa State led 57–56 in the final seconds before Hampton’s senior forward Tarvis Williams’s shot went in with 6.9 seconds left. The Cyclones had one last chance, but Tinsley missed a layin with a second left. The win by Hampton was the fourth time a 15-seed won a game.

Mike Kzryzewski’s teams hadn’t lost in the first round since 1996, when they were seeded eighth. But following the graduations of J.J. Redick and Shelden Williams the year before, the team had clearly taken a step back and VCU took full advantage of the opportunity.

Five Rams players scored in double-digits, including 22 points from sophomore guard Eric Maynor as VCU pulled off the win.

5. 1996: 13) Princeton beat 4) UCLA 43–41—The defending champion Bruins had plenty of talent left in the tank from the previous season, and may have been looking past the Ivy League champions when they stepped on the court in this memorable first-round matchup. They soon found themselves playing at Princeton coach Pete Carril’s methodical half-court pace—and not playing it very well.

Tigers freshman forward Gabe Lewullis scored off a backdoor cut with 3.9 seconds left on the clock to win it, stunning the Bruins and sending coach Carril off to retirement in style.

4. 2005: 14) Bucknell beat 3) Kansas 64–63—Kansas had made the Final Four two of three previous seasons and had won 21 straight first-rounders before matching up with unknown Bucknell in 2005.

The Jayhawks had been the preseason No. 1 team in the country but after a 20–1 start to the season had faltered down the stretch. Still, few expected Bucknell, which had never won a tournament game, to give them a problem.

But as the game stayed close throughout, the Jayhawks tightened up and when Bison center Chris McNaughton banked in a hook shot (of all things) to put Bucknell ahead 64–63 with just seconds remaining, KU had one last shot. But Wayne Simien’s last-second jumper from just inside the arc rimmed out and the Hawks were done.

3. 1993: 15) Santa Clara beat 2) Arizona 64–61—The Wildcats were ranked sixth nationally and were heavily favored to beat the Steve Nash-led Broncos in this shocking NCAA opener.

Nash wasn’t the well-known two-time MVP that he is today, though someone must have seen it coming after his team absorbed a 25–0 second-half run by the Wildcats and still pulled off the second ever win by a 15-seed.

Nash hit just 1 of 7 shots but made 8 of his 10 free throws and it was just enough to get past the Wildcats.

Contributing to the loss for Arizona was guard Damon Stoudamire’s 0-for-7 shooting from the floor as the team hit just 31 percent of their shots on the day.

Coach K has 11 Final Four appearances and 4 national titles, but despite that his Blue Devils weren’t up to the task in the 2012 opener against lightly regarded Lehigh.

Lehigh’s leading-scorer C.J. McCollum put up 30 points while dishing out 6 assists, and the Mountain Hawks held Duke to just 6 of 26 3-point shooting in the shocking loss.

As bad as Duke’s outside shooting was, it was their second-half defense that really did them in. The Blue Devils, which led 30–28 at the half, gave up 47 points to the Patriot League champs in the latter period to lose the game.

Richmond had made a name for itself three years earlier knocking off the defending champion and fourth-seeded Hoosiers in the first round of the 1988 tourney on its way to the regional semifinals.

The ’Cuse were led by All-American Billy Owens, who averaged 23.3 points and 11.6 rebounds per game that season.

Owens played the entire 40 minutes for the desperate Orange, scoring 22 points and grabbing 7 rebounds, but Jim Boeheim’s club hit just 5 of 21 shots from 3-point land in the ground-breaking loss.