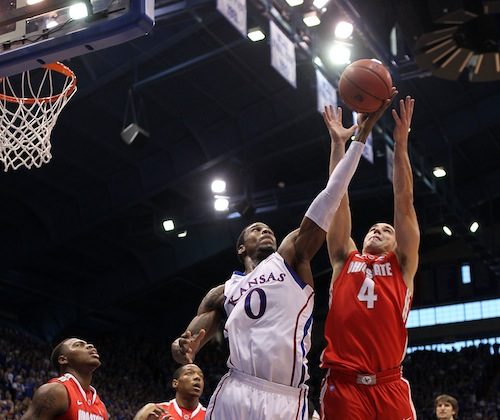 The NCAA tournament has come to its final weekend with the playing of the Final Four. Both Saturday matches are rematches of earlier games this season and for those of you who were tired of a Cinderella crashing the party each of the last two years, these games are for you.

Game One: Kentucky (36-2) versus Louisville (30-9); Prediction: Louisville shocks its rival-Wildcats 74-71—Probably the worst matchup, as far as motivation goes, for Kentucky has to beat its in-state rival Cardinals. Three reasons why:

1. The Wildcats beat Louisville earlier this season, though their defense was impressive, and would love to make amends.

On New Year’s Eve 2011 the Wildcats took care of Rick Pitino’s Cardinals 69–62 in a horrid-shooting affair. Louisville actually held Calipari’s team to just 29.8 percent shooting though it only shot 32.3 percent themselves. The Wildcats though that were playing at home, out-rebounded Louisville 49–28, getting double-doubles from Michael Kidd-Gilchrist (24 points, 19 rebounds) and Anthony Davis (18 points, 10 rebounds, 6 blocked shots).

The Cardinals kept the game close thanks to Russ Smith’s 30 points; granted, 8 of those points came in the final 12 seconds of the already-decided game.

2. Kentucky is the playing knowing they should win, being the better team, while Louisville is playing with house money.

Top-seeded Kentucky, should it win the title, would set the NCAA record for most wins in a season with 38, while its pair of losses were by a combined eight points—one of them a buzzer-beating 3-pointer. They clearly are the best team but sometimes due to pressure, overconfidence, or an off day the best team doesn’t always win; think Duke in 1999, UNLV in 1991, or Georgetown in 1985. It’s tough to be the best team in the regular season and maintain that through the postseason.

Furthermore, they’ve continued to cement their unbeatable reputation with four consecutive double-digit wins against tournament foes Western Kentucky (81–66), Iowa State (87–71), Indiana (102–90), and Baylor (82–70). Add in this week’s public comments by sports experts wondering if the Wildcats could beat an NBA team and the pressure has never been higher.

Fourth-seeded Louisville, on the other hand was not expected to get this far, especially after a six-game stretch from February to early March that saw it lose four times, dropping its record to 22-9. Much like eventual-champion Connecticut last year the Cardinals needed to have a good showing in the Big East Tournament and won it, while propelling them all the way to the Final Four. The pressure is still off them.

3. This is the ultimate spot for a team to beat their archrival. What better win could Louisville ever have than to spoil one of Kentucky’s best teams ever by shocking them in the Final Four, denying them a much-deserved championship in the process? This would be the ultimate victory by Louisville which has always been regarded as a second-tier program to the on-going juggernaut that the in-state Wildcats have been since Adolph Rupp took over in 1930.

Game Two: Ohio State (31-7) versus Kansas (31-6); Prediction: Kansas wins the rematch as well 79–77, heads to title game—This game will have a little bit different motivation/revenge factor. Ohio State lost the first time around, 78–67 in Lawrence, Kan., but the game had an asterisk next to it because of Ohio State star forward Jared Sullinger’s absence to due back spasms. The Buckeyes feel they got short-changed the first time around while Kansas is tired of hearing it beat a Sullinger-less Ohio State squad. Both have motivation for a win this time.