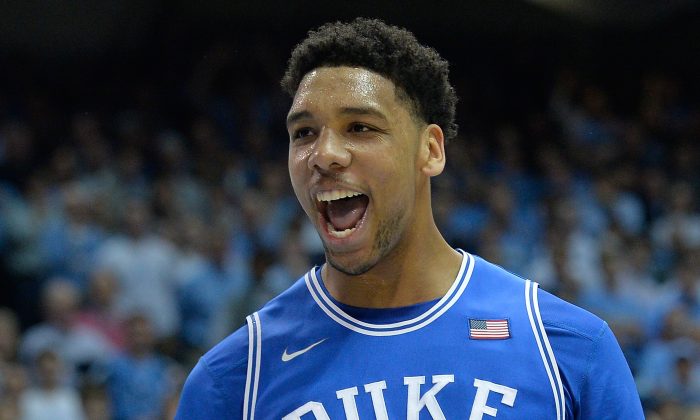 Jahlil Okafor #15 of the Duke Blue Devils reacts after scoring against the North Carolina Tar Heels during their game at the Dean Smith Center on March 7, 2015 in Chapel Hill, North Carolina. (Photo by Grant Halverson/Getty Images)
College Sports

The 2015 NCAA tournament, starting in full today March 19, is replete with star players that will be taken in the first-round of the upcoming NBA draft.

Check out 10 players to watch in this year’s tournament below.

Okafor will be picked in the top five and could get picked number one for his scoring prowess. Okafor’s skill in the low block drew New York Knicks president to watch him in person, and is the primary reason the Blue Devils have one of the top attacks in the nation.

Okafor struggles on the defensive side, though, and needs to avoid foul trouble in order for Duke to go far in March Madness. Besides his overall skill, fans of pro teams slated to get a top pick–such as the Knicks, Timberwolves, or 76ers–will want to watch to gauge how the center would fit with their team next season.

Like the rest of the top prospects, Okafor’s performance in the tournament will have an impact on where he’s picked in the draft.

Russell is being projected by some as the next John Wall or Russell Westbrook, an exciting prospect that could change the face of a franchise.

The point guard can’t shoot well as of yet but has made some of the high-level passes that only a select few can convert on a regular basis.

Tune in to see Russell try to lead his team deep into the tournament.

The consensus No. 1 seed in the tournament, Kentucky boasts a slew of top notch players that will go in the first round of the upcoming draft.

Anthony-Towns presents a much different look than Okafor. He is a defensive force, notching 2.4 blocks in just over 20 minutes a game, while also displaying more range on the offensive end.

Cauley-Stein is a versatile big man who also plays hard on defense and can dominate in the low post. Booker is one of the if not the best shooter in college basketball, hitting over 40 percent of his shots from behind the arc.

Wisconsin’s first game: Versus Coastal Carolina on March 20 at 9:20 p.m. EST on TBS

Kaminsky has serious range for a seven-footer, with the ability to hit three-pointers and also show off moves on the post.

Kaminsky, in contrast with many other top prospects, is a senior. He has a lower ceiling than most but offers a stable, intelligent presence that Epoch Times expert Dave Martin called “a poor man’s Dirk Nowitzky.”

Perhaps more than others, Kaminsky will rise or fall with his performance in the tournament. Tune in to see his smooth shooting touch and nice passes.

The sophomore will likely go outside the top 10 in the upcoming draft but won’t drop much further, meaning he’ll go to a team like the Phoenix Suns, 76ers (via the Miami Heat), or Indiana Pacers.

Portis has a nice all-around game that should fit in nicely on the pro level as a third or fourth option on offense.

With his mid-range success, Portis could easily develop into a true stretch four as well.

Arizona’s first game: Versus Texas Southern on March 19 at 2 p.m. EST on TNT

“Stan Van Gundy will want a player who can contribute right away, and Johnson is blessed with a NBA body, toughness and a motor that won’t stop. The Pistons need some winners on their roster, and Johnson has won at every level. Mario Hezonja and Kelly Oubre both might have more upside, but for a team that wants to make a move for the playoffs next season, Johnson is the guy,” Chad Ford of ESPN noted.

Both forwards will display their intriguing skill sets in the tournament, and should be fun to watch as Arizona is expected to make a deep run, possibly all the way to the national championship.

The Jayhawks are in some books as the weakest No. 2 seed in this tournament, but should still make some noise before falling to Kentucky or just before.

In any case, the multiple games will enable fans to get good looks at both Oubre, a small forward expected to go just outside the top 10 to a team like the Celtics or Hawks, and Alexander, an uber-athletic power forward that’s slotted in some mock drafts going to the Mavericks as their Brandon Wright replacement.

Watch especially for Oubre to do what he does best–score in a variety of ways.