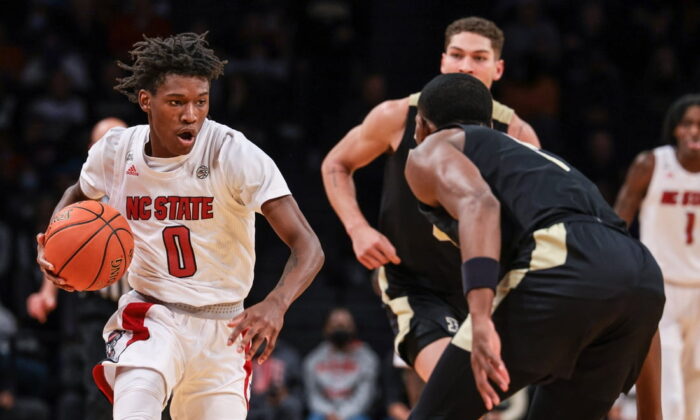 NC State Fights to Get Back on Track vs. Streaking Miami

The North Carolina State Wolfpack and Miami Hurricanes have been going in different directions.

NC State, after a 6–1 start, has lost four of its past five games while Miami has won five straight.

On Wednesday night, those different directions will collide in Miami as the Wolfpack (7–5, 0–1 ACC) visit the Hurricanes (9–3, 1–0) in a conference matchup.

NC State’s slump has been odd. It includes a hard-fought loss to top-ranked Purdue in overtime. Nine days later, however, NC State lost by 14 points to Wright State (4–7) in Raleigh.

A bright spot for the Wolfpack has been 6–4 freshman guard Terquavion Smith, who was North Carolina’s Mr. Basketball last season.

Smith, who has already earned two ACC Rookie of the Week awards and averages 13.8 points, scored a season-high 27 points on Dec. 21 against Wright State, making 12 of 25 shots, including 3 of 10 on three-pointers.

NC State’s leading scorer is Dereon Seabron, a 6–7 wing who is averaging 19.0 points and a team-high 10.1 rebounds. Jericole Hellems is NC State’s best three-point shooter (39.7 percent), and he ranks second in scoring (14.4).

Miami beat NC State 64–59 last season in Raleigh, rallying from a six-point deficit with 6:45 to play, but Miami has lost its past two games at home vs. the Wolfpack.

Miami’s advantage on Wednesday figures to be its experience, including three starters—Kameron McGusty, Charlie Moore, and Sam Waardenburg—who are in their sixth year of collegiate basketball.

McGusty leads Miami in scoring (18.4), shooting 82.1 percent on free throws and 39.2 percent on three-pointers. Most recently in a win over Stetson last week, McGusty had 27 points on 9-for-12 shooting, including 6 of 8 from deep.

However, coach Jim Larranaga is concerned with his team’s eight-day holiday break between games.

“What we’ve done is get guys back in time to get in some conditioning and real practices,” Larranaga said.