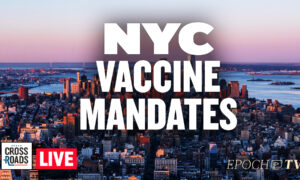 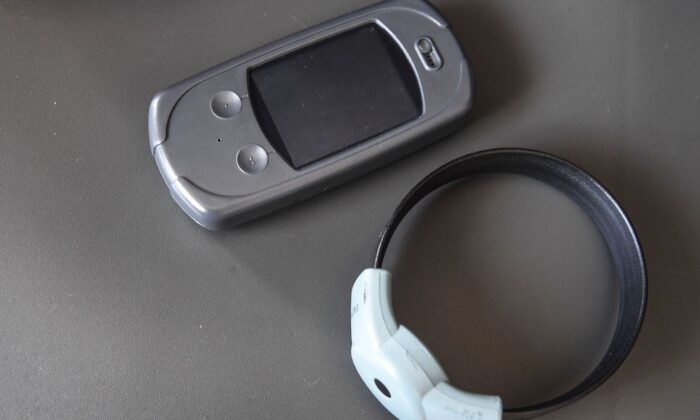 An "anti-approaching bracelet", for domestic violence offenders, during the presentation of the device's implementation on Sept. 24, 2020. (Alain Jocard/AFP/Getty Images)
US News

By Dan Kane
From The News & Observer

Lawmakers approved the pilot project, run by a Greenville-based nonprofit, assigning funding to the state Department of Public Safety instead.

Caitlyn’s Courge, the nonprofit, has collected glowing testimonials from judges about the project’s effect. But its launch raised questions about efforts made to attract competitive bids from vendors to deliver the service at a competitive price.

Now state House budget writers want to spend much more money, $27 million proposed over the next two fiscal years, on the project technology. This time the North Carolina Administrative Office of the Courts (AOC) would have the responsibility of finding vendors to provide the service.

The $27 million the House budget proposes for monitoring would rival the $28.4 million the chamber would spend on all other domestic violence services, including operating shelters, counseling and economic support, said Kathleen Lockwood, policy director for the North Carolina Coalition Against Domestic Violence.

“The State would see a greater return on its investment by allocating this funding to domestic violence service providers and resources such as affordable housing and paid leave that prevent domestic violence perpetration,” she said.

The pilot program allows judges to provide people with hand-held GPS devices that alert them when the defendants they’ve accused of domestic violence are nearby. The defendants wear GPS monitoring ankle bracelets devices while out of jail awaiting trial.

In February, The News & Observer reported that Caitlyn’s Courage, a newly-formed nonprofit based in Greenville, was late to notify potential vendors for monitoring equipment and services and declined to identify all bidders or release bid documents.

Tarheel Monitoring, a Wilmington company with ties to House Speaker Tim Moore, won the bid. Two of its officers made $3,000 donations to Moore in 2019, campaign records show. Gene Davis, a friend who does legal work with Moore, held an ownership stake in a Tarheel Monitoring spinoff several years ago, according to Davis’ economic interest statements filed with the State Ethics Commission.

In April, WBTV of Charlotte reported that Joe Russo, an electronic monitoring expert at the University of Denver, questioned how the money was being spent. Tarheel Monitoring purchased 1,400 ankle monitoring units for $700,000 instead of leasing them, the TV station reported. The company spent the rest of the money on prepaid monitoring services at a rate higher than other monitoring contracts WBTV reviewed.

The nonprofit is named after Caitlyn Whitehurst, 25, who was killed by an ex-boyfriend two years ago. Her family started the nonprofit and her father, Judson Whitehurst, serves as its board chairman. He did not respond to a reporter’s phone call and email seeking comment.

One of them, Rep. Donny Lambeth, a Republican and a top House budget writer, suggested the spending originated with a House subcommittee for justice and public safety spending. But Rep. Allen McNeill, a chairman on that committee, told the N&O to ask top House leaders who sought the provision.

Chris Mears, a spokesman for the AOC, said the agency had not asked to take over the program and if that provision ends up in the state budget, “we don’t know who would be charged with administering it.” The AOC would follow state laws for competitive bidding, he said.

He also said AOC officials do not know which lawmaker sought the funding.

In April, Caitlyn’s Courage reported to state lawmakers that courts and law enforcement quickly embraced the program. Fifteen of the state’s 41 judicial districts are using it, including the one serving Orange and Chatham counties.

Courts have long issued ankle bracelets to track defendants accused of domestic violence and other crimes. Under this program, accusers are given a handheld device that signals when defendants are within a proximity set by the court.

Caitlyn’s Courage reported that 37 of the 308 defendants being monitored during December 2020 to March 2021 were re-arrested for entering protective zones, tampering with the devices and/or improper handling of their batteries. The nonprofit cited a case in Cumberland County where a victim, who had received a threatening video from a defendant, alerted authorities when her tracking device went off and he was arrested near her home.

“The program protected the victim and her child and prevented the incident from escalating into a deadly situation,” the report said.

Rep. Marcia Morey, a Democrat, said Tuesday she questioned the proposed spending when it popped up in a budget report last week “because it was alarming how much money was being committed to it without any specifics in terms of how much equipment do you need.”