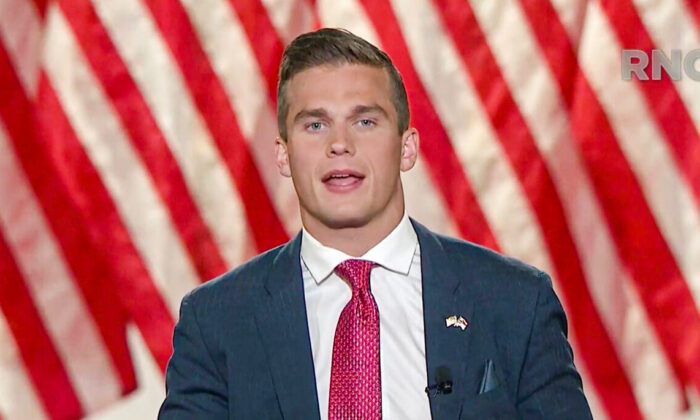 North Carolina officials have no authority to block the reelection bid of U.S. Rep. Madison Cawthorn (R-N.C.) on 14th Amendment grounds over his actions in the run-up to the Jan. 6, 2021, breach of the U.S. Capitol building, his attorney told The Epoch Times.

Cawthorn’s mere advocacy of a pro-Trump position during the aftermath of the hotly contested 2020 presidential election doesn’t constitute participating in an insurrection, something that can trigger a constitutional bar that prevents the insurrectionist from seeking elective office, Cawthorn attorney James Bopp Jr. told The Epoch Times on Feb. 14.

Cawthorn, who had been sworn in as a federal lawmaker only days before, was already present in the U.S. House of Representatives fulfilling his constitutional duties before the disturbance broke out on Jan. 6, 2021, and his activities there didn’t contribute to the hours-long delay of the congressional certification of the election.

Cawthorn, 26, was elected in November 2020 and describes himself as a Christian and constitutional conservative. He’s considered to be a rising star in the conservative movement.

The North Carolina State Board of Elections isn’t currently preventing the incumbent first-term congressman from running again, but stated in a Feb. 7 filing in federal court that it has the power to do so under Section 3 of the 14th Amendment to the U.S. Constitution.

The relevant part of that constitutional provision states, “No person shall be a … Representative in Congress … who, having previously taken an oath, as a member of Congress … to support the Constitution of the United States, shall have engaged in insurrection or rebellion against the same.”

The board’s claim appears in a filing in Cawthorn v. Circosta, court file 5:22-cv-50. The legal complaint was filed on Jan. 31 (pdf) in the U.S. District Court for the Eastern District of North Carolina. The lead defendant, Damon Circosta, chairman of the North Carolina State Board of Elections, is being sued in his official capacity. Cawthorn is suing in response to several challenges that have been filed against his candidacy.

In the court document, the State Board Defendants’ Response to Plaintiff’s Motion for Preliminary Injunction, the board stated that it “polices candidate qualifications prior to the elections” and that states “have long enforced age and residency requirements, without question and with very few if any legal challenges.”

The state also “has the same authority to police which candidates should, or should not, be disqualified per Section 3 of the Fourteenth Amendment.”

Bopp disputed this claim and noted that those state residents who are challenging Cawthorn’s reelection bid have no credible evidence that he engaged in an insurrection.

Their claim that his urging of Trump supporters to “fight” during a rally on the National Mall on Jan. 6, 2021, before the Capitol building was breached is somehow related to an attempt to overthrow the government is ridiculous, according to Bopp, who noted that the word “fight” is part of the repertory of standard political rhetoric that’s protected by the First Amendment.

“There was absolutely nothing–none of his speech encouraged anyone to perform any illegal acts or to even go into the Capitol at all in any way,” he said.

Using speech such as “’we need to fight for our political rights,’ cannot possibly be used … to punish somebody.”

Bopp said the court case has been delayed because the state electoral map hasn’t yet been finalized.

In North Carolina, the next statewide primary election is scheduled for May 17. The deadline for candidates to file to run is March 4.

Attorney Marc Elias, who has a long history of successfully challenging election integrity laws in court, started laying out a blueprint for using the 14th Amendment to boot Republicans off the ballot in a provocative Twitter post on Dec. 20, 2021.

Elias is also a major figure in the “Russiagate” conspiracy. He represented the Democratic National Committee and Hillary Clinton’s campaign in the 2016 presidential election cycle, hiring Fusion GPS in April 2016 to conduct opposition research against then-presidential candidate Donald Trump. That research effort culminated in the salacious, now-discredited 35-page dossier written by former British spy Christopher Steele that purported to tie Trump to the Russian government.

“My prediction for 2022: Before the midterm election, we will have a serious discussion about whether individual Republican House Members are disqualified by Section 3 of the 14th Amendment from serving in Congress,” Elias wrote on Twitter. “We may even see litigation.”

He expanded on this idea three weeks later on his Democracy Docket website.

“It seems quite likely that one or more Republican members of Congress will be subject to this disqualification, and it is important that we start to identify them now,” Elias wrote.