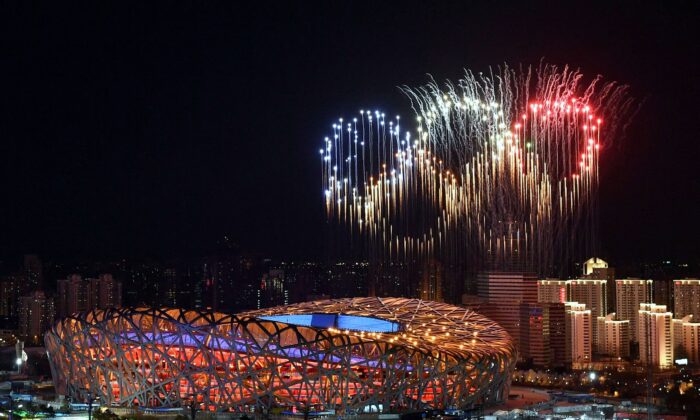 Fireworks in the shape of the Olympic rings explode above the National Stadium during the opening ceremony of the 2022 Winter Olympics in Beijing on Feb. 4, 2022. (Li Xin/Pool/AFP via Getty Images)
Beijing 2022 Olympics

NBC’s coverage of the Beijing Winter Olympics opening ceremony drew a record-low number of viewers as compared with previous years, with a total of just 16 million tuning in on Feb. 4.

That figure is down about 43 percent from the 2018 Winter Olympics in Pyeongchang, South Korea, when about 28.3 million people watched, according to TheWrap, citing numbers from the Comcast Corp.-owned NBC on its TV and streaming services. NBC aired the ceremony twice on Feb. 4.

For the primetime showing, about 8.7 million tuned in to watch the NBC broadcast of the propaganda-laden ceremony that was put on by the Chinese Communist Party’s (CCP) leadership and filmmaker Zhang Yimou, according to the ratings cited by Deadline.com. The numbers for the primetime broadcast fell about 69 percent from the Pyeongchang Games.

While some outlets have blamed the pandemic and a steady decline in viewership for the Olympics, the CCP’s significant human rights abuses against a variety of groups, including Falun Gong practitioners, Uyghurs, Tibetans, Hong Kong activists, and others may be a catalyst for the recent drop.

Several Western leaders panned the CCP for its rights abuses, including the Biden administration, which in December 2021 announced a diplomatic boycott of the Olympics due to “ongoing genocide, crimes against humanity, and other human rights abuses,” although the United States still opted to send its athletes. Several other like-minded countries agreed not to send any political delegations to China.

Meanwhile, the International Olympics Committee (IOC), which has opted to demur on any criticism of the CCP’s poor human rights recorded, has faced backlash. The IOC again fielded criticism after Dinigeer Yilamujiang, a Uyghur athlete from Xinjiang, lit the cauldron for the host country at the conclusion of the Olympic torch relay.

“It’s incredibly distressing … to see the organization allow itself to be used yet again as a vehicle for the CCP’s [Chinese Communist Party] propaganda,” Andrew Bremberg, a former U.S. representative to the Office of the United Nations, told Epoch TV’s “American Thought Leaders” this week. “That is what we saw that happened in 2008, both from a domestic and international perspective.”

While he believes the United States did the right thing by its diplomatic boycott of the Games, Bremberg said that the Biden administration should have taken more action.

“I’d love to see the president of the United States talk sometime in the next three weeks. … Why is there a diplomatic boycott of the Olympics? What is happening in China today?” he said. “It is an opportunity for our leaders to say, ‘Well, you may be seeing or hearing this [CCP] propaganda. But we’re going to tell you the truth of what’s really happening in China.’”