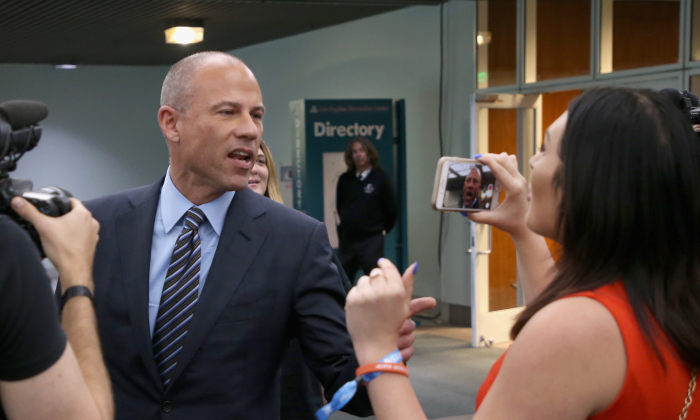 NBC News reporter Kate Snow issued a lengthy and faulty explanation on Oct. 27 for why her team withheld information which would clear Justice Brett Kavanaugh of allegations of misconduct before the Senate voted to confirm him to the Supreme Court.

NBC News revealed on Oct. 25 that it withheld since Sept. 30 an interview with a witness who denied the allegations against Kavanaugh made by Julie Swetnick. The witness also told the network that she never saw the judge behave inappropriately.

The day after receiving the exculpatory evidence, NBC aired a primetime interview with Swetnick. The network did not disclose during and after the interview that it had a witness statement denying Swetnick’s claims and vouching for Kavanaugh’s character. Exacerbating the omission, the witness was produced by Swetnick’s attorney, Michael Avenatti.

Swetnick submitted her allegations against Kavanaugh in a sworn statement to the Senate Judiciary Committee on Sept. 26, amid a national spectacle surrounding Kavanaugh’s confirmation.

On Sept. 30, in order to vet Swetnick’s story, NBC interviewed an unnamed woman put forth by Avenatti. The woman denied Swetnick’s allegations. On Oct. 2, Avenatti submitted an anonymous declaration to the committee and told NBC that it was written by the same woman the network interviewed on Sept. 30. However, the declaration was a corroboration of Swetnick’s claims.

On Oct. 3, NBC independently interviewed the unnamed woman again. The woman told the network that she only skimmed the statement Avenatti submitted. On Oct. 4, the woman contacted NBC to deny the claims in Avenatti’s statement. On Oct. 5, the woman wrote to NBC: “I will definitely talk to you again and no longer Avenatti. I do not like that he twisted my words.”

In total, NBC received denials of Swetnick’s claims on at least three occasions before the Senate voted on Kavanaugh, but chose to withhold them. In the meantime, both before and after the confirmation, NBC continued to report on Swetnick’s allegations without mentioning that it was aware of information contradicting the claims.

Avenatti complicated matters for NBC by challenging the denials of his witness. At one point Avenatti claimed, contradicting his earlier statement, that the woman interviewed was not the same as the one who signed the statement. NBC perceived Avenatti’s actions as “an apparent effort to thwart the reporting process.”

In a series of messages on Twitter, Snow provided a faulty explanation on Oct. 27 for withholding the exculpatory story.

“By the time we were able to find the woman independently from Mr. Avenatti, who declined to give us her full legal name and phone number, and fully report and vet her story, the Kavanaugh confirmation process was over and the news value was limited,” Snow wrote on Twitter.

Contrary to Snow’s claim, the Kavanaugh confirmation process was not over when NBC News interviewed the female witness independently. Snow’s article states the woman was interviewed for a second time on Oct. 3, three days before the Senate voted on Kavanaugh on Oct. 6.

To say that “the news value was limited” is also misleading, considering that Kavanaugh’s confirmation dominated news coverage at the time, including that of NBC News.

To claim that the female witness’s story was held back because NBC could not “fully report and vet her story” exposes a double standard. NBC aired a primetime interview with Swetnick while admitting that it could not verify her allegations. Yet the network used the lack of verification as the reason to hold back a story that would clear Kavanaugh.

Adding further doubt to the vetting explanation, NBC had no issues with reporting an allegation against Kavanaugh made in an anonymous letter to the judiciary committee detailing an incident involving an anonymous person and an anonymous friend. The committee dismissed the letter because there was no way to verify it. NBC reported on it, without verification, on the day that the committee released a transcript of an interview with Kavanaugh where the judge denied the allegation.

“To be clear—we did NOT have enough reporting to publish the second woman’s account until after Justice Kavanaugh secured enough votes for confirmation,” Snow wrote, again exposing a double standard for verification.

“When Senator Grassley cited my interview with Swetnick this week when making a criminal referral, the second woman’s story became newsworthy again, so we published right away,” Snow wrote.

In the referral, Grassley cited Swetnick’s Oct. 1 interview with NBC to show that Swetnick contradicted the allegations she made in her sworn statement. The referral also details extensive credibility issues with both Swetnick and Avenatti that the committee unearthed during the course of its investigation.

“When a well-meaning citizen comes forward with information relevant to the committee’s work, I take it seriously,” Grassley said in a statement accompanying the referral. “But in the heat of partisan moments, some do try to knowingly mislead the committee.”

After NBC revealed on Oct. 25 the information it had withheld, Grassley issued a second criminal referral for Avenatti based on the evidence in the NBC report.

The fact that the NBC report resulted in a criminal referral from a sitting Senator to the director of the FBI and the attorney general further undermines Snow’s claim that the article’s “news value was limited.”