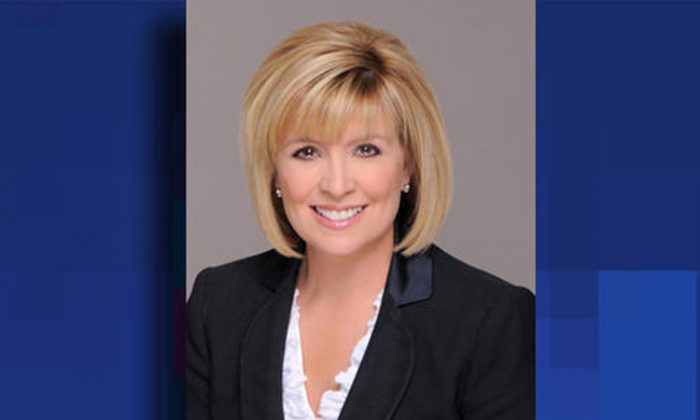 Classical Chinese dance lies at the heart of Shen Yun’s performances. Hearkening to China’s 5,000 years of civilization, the dancers turn this intensely difficult art form into something world-wide audiences praise as astonishingly beautiful.

Amazed by the dances, Ms. Rosati said, “It was very impressive, really impressive. I loved the long sleeves dance [Sleeves of Silk]. I thought it was elegant … magical. I loved it.”

“And then of course the men, the Joyful Little Monks was very funny,” she said. “I think all of the performers are so strong, not only in dance but also the gymnastics with all those flips. It was very impressive!”

“My husband got us seats right up front and, to see the orchestra, it’s been a lot of fun to see them perform as well,” she said.

New York-based Shen Yun not only presents stories about ancient China but also contemporary scenes depicting the repression of belief in China today. One scene shows young Chinese students standing up for their practice of Falun Gong, only to be beaten to death by evil guards. The persecution of Falun Gong practitioners has been going on for over 10 years in China, the Shen Yun emcees told the audience.

“It was very well done,” Ms. Rosati said. “I thought that was really interesting. In fact, I was watching my children’s faces during that piece because I think sometimes we forget in America the struggles of the Chinese in their efforts to practice their faith, to express their faith.

“It was very moving,” she said, repeating, “very well done.”

Shen Yun Performing Arts’ theatrical display of classical Chinese culture is further enhanced by the use of digital technology, animated figures projected on a digital backdrop.

Ms. Rosati was impressed. “I think it’s a beautiful display of the Chinese culture. My children enjoyed the technology which allowed for the artists to jump out of the picture and to jump back into the picture. It was very creative, we enjoyed it very much!”

Ms. Rosati’s daughter said she had studied Chinese culture in college but Shen Yun had given her much to reflect upon.

“I was reading the subtitles and listening to the baritone when he sang about the Divine. I realized that it’s part of the Chinese culture [which] has been around for so, so long. I feel that we have something to learn, so I think that’s something I’ll take home with me to think about, to ponder,” she said.

Allison Rosati is co-anchor of NBC 5 News’ award-winning news team at 5, 6 and 7 p.m. Ms. Rosati has received numerous awards for her work, including a National Emmy. She was named Humanitarian Of The Year in 2004 by the Italian American Police Association, who also named her Woman Of The Year in 2001.