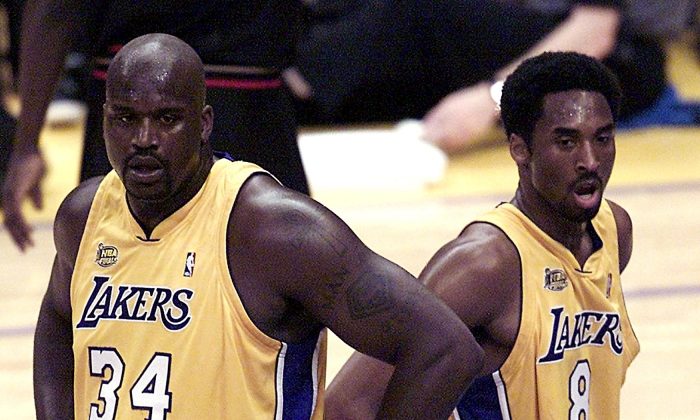 Los Angeles Lakers' stars Shaquille O'Neal (R) and Kobe Bryant stand next to each other during the first quarter of NBA Finals, Game 1 against the Philadelphia 76ers. (Vince Bucci/AFP/Getty Images)
NBA

The Miami Heat are clearly the team to beat in these NBA playoffs—without question. Thanks to injuries to Oklahoma City’s Russell Westbrook and Chicago’s Derrick Rose that have derailed the Heat’s top competition, the question seems to have shifted from who will win to how many games will the Heat drop in winning it all? And then, where will the Heat’s playoff run rank in NBA history? In light of that, here are the top five playoff runs, since the league expanded the postseason to four rounds (though the top seeds received first-round byes until 1984) in 1975:

In 1986, the Celtics blitzed through Chicago, Indiana, and Milwaukee, going 10-1 in the process en route to the finals that year to face Houston’s twin towers of Akeem Olajuwon and Ralph Sampson. The Rockets, fresh off a shocking, five-game dismissal of the Lakers in the conference finals, were able to take a pair of games from Boston, before bowing in six.

The following year the Lakers changed the offensive focus to center around Magic Johnson instead of an aging Kareem Abdul-Jabbar, whom Houston had exposed the previous season. LA, much like Boston the season before lost just a single game in dismissing Denver, Golden State, and Seattle to reach the Finals. Once there, they were pitted against Boston for the third time in four years. Magic Johnson’s game-winning “baby hook”’ shot in Game 4 shifted the series as the Lakers won 4-2.

4. 1989 Detroit Pistons: 15-2—The Pistons’ two-year run as champions, wedged in between the Bird/Magic era and Jordan’s run in Chicago, is usually forgotten. But in 1989 Detroit won its first title in dominating fashion, losing only to Jordan’s Bulls (twice) in the conference finals. Once the “Bad Boys” broke through to the finals they only had to get past an injury-depleted Lakers’ team. With Lakers’ shooting guard Byron Scott out for the series (hamstring) and Magic Johnson soon to follow in Game 2 with a hamstring injury of his own, the Pistons had little trouble sweeping the team that had beat them in seven games the year before.

3. 1991 Chicago Bulls: 15-2—Jordan’s first title series saw his Bulls run through the previous two regimes, the Pistons and then Lakers, with little trouble. Chicago, which had been eliminated by the Pistons in each of the previous three seasons, met up with Detroit again after blowing through the Knicks and 76ers in the first two rounds, while dropping just one game. They had even less trouble against the Pistons though, sweeping them in four games and effectively ending the “Bad Boys” era in the process. After losing the opening game of the finals to Magic’s Lakers, Chicago reeled off four straight wins to seal the title.

2. 1983 Philadelphia 76ers: 12-1—Moses Malone and his teammates nearly made good on his famous “fo, fo, fo” prediction for sweeps in all three rounds, losing only one game to Milwaukee in the conference finals. The Sixers swept the Knicks in four in the conference semi-finals and then swept the defending-champion Lakers in four games for the title. This followed a regular season in which a Philadelphia squad that featured Julius Erving, Maurice Cheeks, and the aforementioned Malone started an amazing 57-9, before splitting its final 16 regular season games.

1. 2001 Los Angeles Lakers: 15-1—Still the most dominant run of all-time. The Lakers were defending champions heading into the 2001 season, having the two best players in the league in Shaq and Kobe. But LA didn’t seem big enough for the two of them, who were reportedly not getting along well, which may have been the reason for the team’s sluggish regular season. But after a loss on the first of April that left the team at 48-26, the Lakers would go more than two months without losing again. LA would win the last eight games of the regular season to sneak into the two-seed slot in the loaded west, before beginning its dominant postseason run.

After sweeping Portland and Sacramento in the first two rounds, the Lakers faced off against top-seeded San Antonio in the conference finals as a much-anticipated matchup between the league’s last two champions. But the Lakers blitzed them as well, sweeping them in four games by an average margin of more than 22 points a game. Once in the finals, Larry Brown’s 76ers shocked them in Game 1 with an overtime win, before the Lakers took over and won the series in five games.