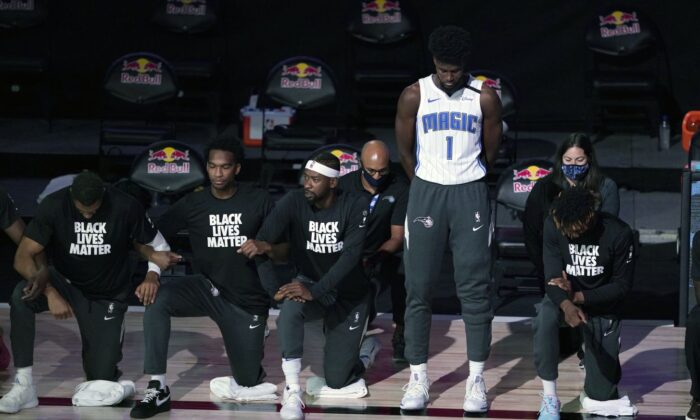 ORLANDO, Fla.—Orlando Magic player Jonathan Isaac discussed his personal history and beliefs, including his past willingness to stand for the national anthem during the Black Lives Matter protests last summer while the rest of his NBA team was kneeling, during a conversation with talk show host Dave Rubin at the National Conservatism Conference.

Isaac also talked about his current resistance to the league’s pressure for universal vaccination, as well as his deep religious faith.

“I had my coming-to-Christ moment while I was a rookie in the NBA,” said Isaac, a 6-foot-11 forward for the Magic who was picked sixth in the 2017 draft.

“That has been my … guiding force, and figuring out what it is that I’m going to do and trying my best to become who God has called me to be,” he said.

Isaac says his relationship to Christ and the gospel helped him go against the grain on the national anthem protest.

“Wearing a T-shirt or kneeling for the national anthem is not, does not go hand in hand with supporting black lives,” Isaac told Rubin.

He told Rubin that the pushback he got was outweighed by positivity and support from “people … who have been supported by the gospel in their own lives, or people who just had their own ideals or respect for the flag of the country.”

Isaac also spoke about the recent press conference in which he explained why he chose not to receive a COVID-19 jab.

“I’ve had COVID already,” Isaac said. “I think the science continues to come out that, you know, our reaction to natural infection is robust and long-lasting in terms of immunity.”

“I’m young, I’m healthy. The vaccine [is] not stopping infection or transmission. And just opening yourself up to the possibility of having an adverse reaction to the vaccine. And then, on the other side of that, all of the hysteria and the craziness around not allowing people to have free choice, and just feeling like people are just beating people up over this thing that should be everybody’s free choice and the media’s handling of it all.”

Isaac voiced his respect for Kyrie Irving of the Brooklyn Nets, a star point guard whose unwillingness to get the jab amid New York City’s draconian vaccine mandate has left him unable to play in the Barclays Center.

“He gets a great deal of respect from me for the courage that it takes to not only say no, but to forgo money and everything that he’s doing. He really does care about the people who are losing jobs and feeling like they don’t have a place to turn in this whole matter.”

He highlighted the actions of the NBA Players Association, which voted against mandatory vaccination for its members.

“That was a decision on the players’ part to say, even though I’m vaccinated, I don’t think it should be mandated for the other players. So, you know, shout-out to the guys in the league for that,” Isaac said.

He also spoke about the basis for conservative engagement with the black community:

“It’s double-sided. It’s ‘Can we promote freedom and personal choice and giving people the tools to become all that they can be in the system of capitalism and entrepreneurship and all that while honoring and respecting the history of our country and the social and [economic] problems that have happened to the black community?’ Can we do both?”

“You do know that you’ll be a ‘white supremacist’ by the time tonight is through,” Rubin responded.

“I think that really shows that it doesn’t mean anything, and it takes away from the word and what it really means, and how terrible that thing is, to call everybody that,” Isaac replied.