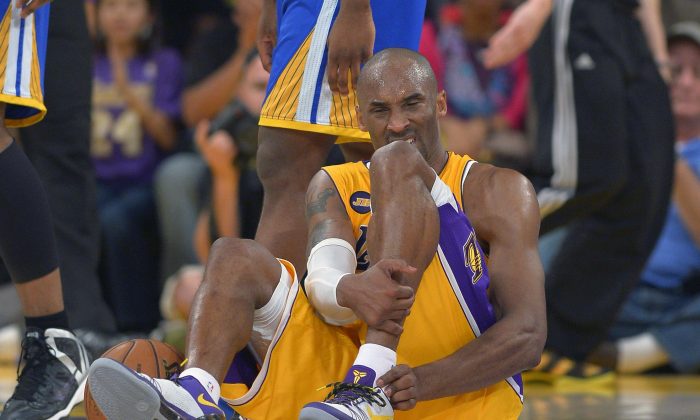 Los Angeles Lakers guard Kobe Bryant grimaces after being injured during the second half of their NBA basketball game against the Golden State Warriors, in Los Angeles, on April 12, 2013. The schedule has been changed to reduce back-to-backs, the union has hired a sports scientist to aid the process and several teams have made changes to their medical and training staffs to address the issues. Anything to slow the scourge of injuries. (AP Photo/Mark J. Terrill)
NBA

The potshots have come at the Golden State Warriors from all directions this off-season. Some rivals have dismissed their breathtaking championship run with a wave of the hand and a snort.

The Warriors just got lucky, they said. They were able to stay mostly healthy for the entire grueling season, avoiding the big injuries that plagued so many other contenders, both in the regular season and in the playoffs.

Considering the stack of injuries that ruined some seasons, keeping 15 players healthy should be viewed as a tremendous accomplishment, not just a random gift from the basketball gods.

As the NBA prepares to tip off the regular season on Tuesday, the biggest issue facing a league on the upswing may not be labor strife or the age limit for draft eligibility. After a season in which star after star missed huge chunks of time, one of the biggest priorities is player health.

“I think what we saw in this season and in the playoffs, especially, is there is no question that injuries had a big impact on the competition,” NBA Commissioner Adam Silver said. “Not that that’s anything new. One of the things we’re looking at as a league is what can we do to keep players on the floor?”

Kevin Durant (55), Carmelo Anthony (42), Dwight Howard (41), Paul George (76) and Kobe Bryant (47) are among the stars who missed at least half the season and seven of the top 10 draft picks—not including Philadelphia’s Dario Saric, who played in Europe—missed significant time with injuries.

Injuries to Cleveland stars Kevin Love and Kyrie Irving in the playoffs hampered the Cavaliers’ ability to hang with the Warriors in the finals, while the Miami Heat (Dwyane Wade and Chris Bosh missed 58 games combined) and Oklahoma City Thunder (Westbrook, Durant and Serge Ibaka missed 88 games) did not make the playoffs for the first time in years due mostly to their missing stars.

A Guide to Watching Sports If You Don’t Have Cable

What Does Two No-Hitters in a Season Equate to in Other Sports?

From overtraining at the AAU level to poor sleep patterns developed during the season’s unforgiving travel schedule, the theories are many as to the number of injuries. And efforts are coming on all fronts to address the scourge.

The NBA appointed Dr. John DiFiori as the league’s director of sports medicine, partnered with GE Healthcare to research musculoskeletal injuries and formed a board of physicians around the league to examine the issue. The league also changed the schedule to drastically reduce the number of back-to-backs and stretches of four games in five nights in hopes of easing some of the stress on players’ bodies.

And teams across the league are revamping their training and medical staffs and building new practice facilities to try to cater to player health.

The Warriors, Minnesota Timberwolves, Atlanta Hawks, Milwaukee Bucks and Detroit Pistons have all brought in new medical and/or training personnel while the Wolves have partnered with the world-renowned Mayo Clinic to open a $25 million practice center that includes a chef on site to prepare healthy meals and a sports medicine wing with MRI machines and physicians available for immediate consultation.

“I think it’s still too early to say this is why these injuries are happening,” Rogowski said. “But we are doing our due diligence. There are so many variables that are involved with injuries. So being able to look at all the different variables and not just one thing is very important.”

Silver is pushing teams to share more on what methods and technologies they are using to combat injuries. Some teams consider that proprietary and are reluctant to give it.

“I don’t want to see our teams just competing in terms of best practices when it comes to the health and welfare of the players,” Silver said. “Teams can learn from each other and can apply it to the league as a whole. As you heard (Warriors coach) Steve Kerr say, as great as it is to win, you want to win with both teams best players on the floor.”

It’s a good line, but one that may fall on deaf ears when presented to hyper-competitive teams looking for any edge.

“The league feels like it’s a priority, but it’s a little interesting,” Dallas Mavericks head athletic trainer Casey Smith said. “Every team is their own entity. There are many of us that do share best practices quite often on all levels and there are some, frankly, that don’t. That’s their decision.”

Smith has kept the Mavericks at the forefront of sports science technology for years, teaming with coach Rick Carlisle and owner Mark Cuban to aggressively examine ways to keep their players healthy. From sleep studies to biomechanics and GPS tracking technology, the Mavericks are throwing everything they have at one of the league’s fundamental problems.

While they have embraced the need for players to rest during the season, Smith said it’s also important to make sure a resting player gets in a hard workout on his “off day.” Dirk Nowitzki may not do the cutting, accelerating and decelerating and physical contact that he does during a game, but he will go through a weightlifting and cardio workout so that his body remains in “active recovery.”

“Although we may limit them from the court at times, we still very much expect some type of demand on their bodies to keep them at that highest threshold,” Smith said, “which I think surprises people sometimes.”

Smith is a big believer in studying movement patterns and trying to reduce the biomechanical asymmetry that can put greater stress on joints and muscles. That also requires athletes to do the same, often tedious, warmups and exercises every day to foster the needed muscle memory.

Timberwolves president Flip Saunders coaxed long-time Pistons physical therapist Arnie Kander out of retirement after enduring a season when 10 of his players missed significant time because of injuries. Kander spent more than two decades in Detroit and gained a reputation for using unusual methods and contraptions to help keep players healthy.

“When you have four or five of your best players out, the game is less,” Kander said. “I’m a basketball fan. I happen to work in the NBA. So I like to see a better game.”