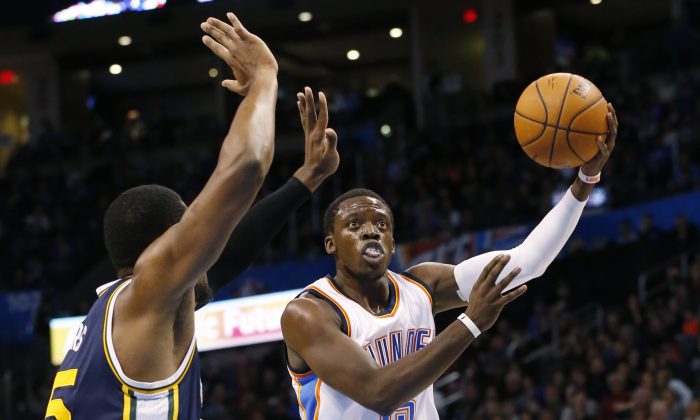 The NBA trade rumors are heating up as teams are now able to move players who signed contracts this summer.

Teams That Should Target Jackson

Reggie Jackson is one of the more intriguing possible trade targets. The guard struggled while trying to carry the Oklahoma City Thunder without its stars, but has shown enough in the past couple years to garner attention.

Jackson wants a starting role, and would likely get a big enough offer as a restricted free agent this offseason to make the Thunder wary of matching it.

So the split is set up, with the question being who he’ll get dealt to.

Bleacher Report has named five teams that should be interested in the guard, who

The Los Angeles Lakers are one, with their obvious discontent over Jeremy Lin and Ronnie Price as point guards.

“A trio of Jackson, Kobe and Nick Young could be dynamic, but it would take some time to jell. That’s why you make the trade for Jackson now. If he proves to be a fine complement to Bryant and Young, the Lakers have the cap room to keep him long-term,” it said.

The Lakers could trade the first-round pick from the Lin trade, which will be at the bottom of the first round.

The Utah Jazz, Indiana Pacers, and New York Knicks are other potential destinations.

The fifth is the Miami Heat, which aren’t faring well so far this year with Mario Chalmers, Norris Cole, and Shabazz Napier sharing poitn guard duty.

“Reggie Jackson would give the Heat a more reliable scoring option than what they have in Chalmers and Cole at point guard. He could also take some of the facilitating duties away from [Dwyane] Wade, who leads the team in assists,” it noted.

“With Flash turning 33 in January, it would benefit the team to lighten the load on his shoulders to keep him fresh for a playoff run.”

The Charlotte Hornets are trying to deal Lance Stephenson, sources told multiple outlets, and the Indiana Pacers are among the teams interested in him.

The Indy Star confirmed that the Pacers have been in talks with the Hornets.

The Star says the team should get the deal done.

“Because the move would be mutually beneficial for a young and rising player who has lost his way after making the biggest decision of his basketball life four months ago, and the proud franchise mired in what’s turning out to be the worst season in 30 years,” it said.

“Because the future demands it. This season might be a lost cause, but instead of flirting with the temptation of blowing things up, the Pacers can rebuild again in 2015-16 with their same five-man core that led the team to back-to-back Eastern Conference Finals.

“And, because both sides made a bad decision during free agency. Stephenson handed all the leverage to Charlotte after turning down life-changing money with the Pacers (5 years, $44 million). However, if the Pacers truly gave Stephenson a deadline to sign with them, as Stephenson has told me several times — and the events following the first day of free agency reveal some truth to this — then they forced out their most prized recruit.”

Sources also indicate that Stephenson would like to return to Indiana.

No other teams have been definitively connected to the swingman as of yet, although the Brooklyn Nets could be among the teams interested in swinging a deal.

“One factor that could ultimately lead to a deal, despite Stephenson’s ragged and discouraging start, is the fact that the three-year, $27 million deal he received over the summer from Charlotte owner Michael Jordan is only guaranteed through next season. The third year of the deal is not guaranteed, which theoretically enhances Charlotte’s chances of finding another team willing to gamble ‎on the mercurial swingman,” ESPN noted.

“Sources say that the Hornets are not in a move-him-at-all-costs mode with Stephenson but made it clear that Charlotte is ready now to abandon the experiment if a palatable deal presents itself.”